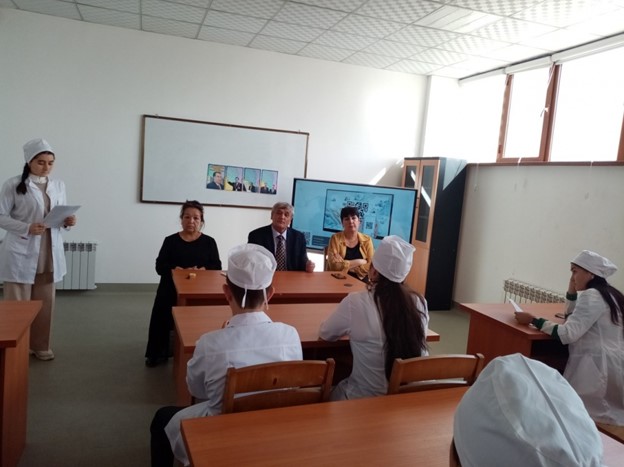 To celebrate the day of the state language, October 4th and 5th , 2022 at the Department of the Russian language of the SEI “ATSMU” was held a student scientific-practical conference.

Students of the 1st year medical faculty and curatorial groups took part in the conference.

The conference was opened by the Head of the Russian Language Department, doctor of pedagogical sciences, professor U. R. Yuldoshev, who in his speeches noted that the annual celebration of the State Language Day is a vivid confirmation of the state policy on the national language, because it is an invaluable wealth of the people and the state. Language is an important and inseparable part of the national culture. We, in history, are respected and recognized precisely because of our language, creative heritage and culture. Therefore, our language and our historical past have always been considered a source of pride and a major factor in the unity of nations.

In their speeches, associate professor M.R. Nazarova, assistant professor S.A. Hotamova, teachers M.A. Kholmatova, O.A. Lysykh, D.H. Sultanova, N.S. Alieva and others noted that knowledge of a native language is a sign of respect for their nation and for their past. Our present and future generations must keep the Tajik language in their consciousness as a sacred national heritage and the highest cultural value, and they should always know the history and heritage of their own native language. After all, the national language and its formation is considered a symbol of our independence, which, as one of the foundations of statehood, occupies an important place and plays an important role in strengthening the consolidation of Tajikistan.

Tajik language, the great heritage of our glorious ancestors, has reached our days, an independent state of the Tajiks from the remote millennia, despite the many obstacles and difficulties, like a thread that connects many generations of our people.

In general, the topics of the reports of the conference concerned the historical aspects of the development of a native - Tajik, the importance of language learning in the professional training of medical students.