THE LEADER OF THE NATION IS OUR PRIDE 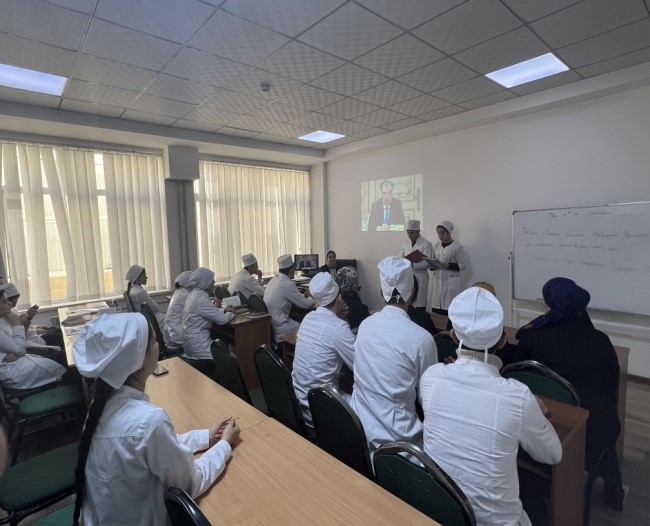 On November 15, 2022, a mini-conference dedicated to the «Day of the President of the Republic of Tajikistan» was held at the department of foreign languages with the participation of teachers and students. The measures were held under the guidance of the curators of the department Mukhamadieva Z.A., Khamroeva S.K., Kayumova M.A., Radjabov R.R., Mirzoeva G.Kh., Karimova M.D., Makhmudova S.S., Naоmiddinova D.M., Mirzoeva Sh.Yu. and Mananova P.I.

In every epoch, for the development and progress of every nation, its people play a tireless role.

Emomali Rahmon entered the political arena as a prominent figure when the Tajik people were in disarray and the country was on the brink of destruction.

At that difficult historical stage, when our country first of all needed peace and stability, unity and capital, it was with the aim of strengthening the executive power, increasing its efficiency, promptly making managerial decisions, and strengthening power that the system of presidential administration of law and order was introduced.

This is a conscious choice, it is a product of historical lessons and the results of our past and present state activities.

Fortunately, the transition to the presidential system not only led to the salvation of the state and the nation, but also became a factor in the stable development of all areas of government, including the economy, politics, culture, education and other areas.

Emomali Rahmon grew up in the arms of the country and the people, in the shadow of the prayers and support of the people, and in a completely natural way received the recognition and respect of his people. This is because his face is a natural person, his personality is a real person, and his services are basic services.

THE LEADER OF THE NATION IS OUR PRIDE