The book "Tajiks" is a flame that shines the dark pages of the history of Tajik people. 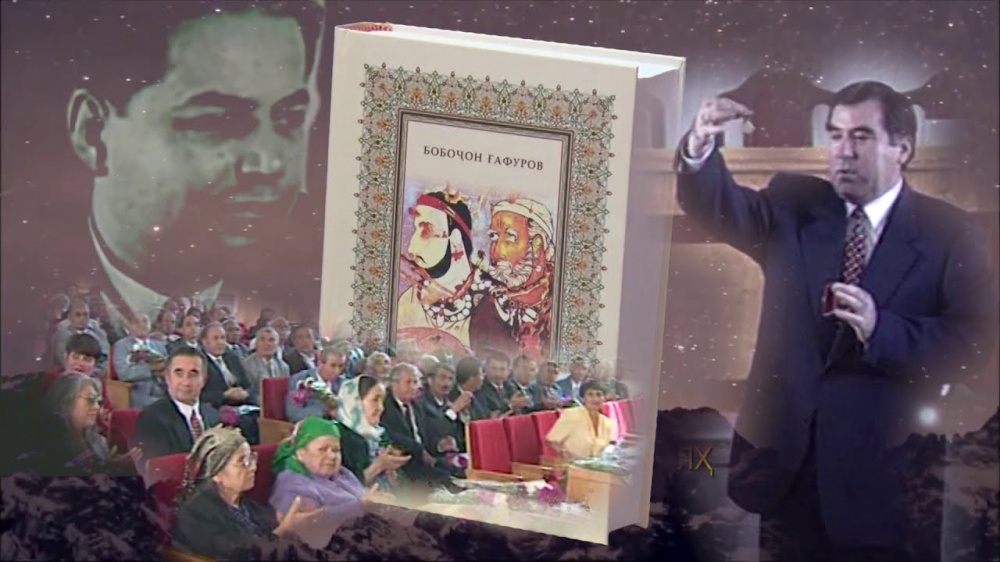 It is impossible to create future without knowing one’s history nation. The history of human being is the evidence of that since the ancient times the Tajik nation are famous as creative people and continuing their ancient tradition.

The President of the Republic of Tajikistan, the Leader of the Nation Emomali Rahmon in his speech on the occasion of the 100th anniversary of the birth of academician Bobojon Gafurov in 2008 underlined: "The book 'Tajiks' was a flame that illuminated the dark pages of the history of Tajik people".

Bobojon Gafurov effectively used more than 2,000 internal and foreign sources, monographs, pamphlets and scholarly articles in writing his masterpiece- “ Tajiks”. Along with Abulkasim Firdavsi's Shahnoma, Abu Bakr Narshahi's History of Bukhara and Nizomulmulk's Politics, this book will serve as the passport of the Tajik people for centuries to come. Rarely in history have political leaders or politicians pursued two careers at once but Bobojon Gafurov was both a sociologist and a wise and kind leader. If in his leadership activities he made sustained efforts for the establishment and prosperity of Tajikistan, in his academic work he created the science of national history and oriental studies and devoted himself to developing and generalizing the rich history and culture of the Tajik peopleIn his prosperous life Bobojon Gafurov left many cultural and historical monuments, the number of which can be estimated at about 400. Among these valuable masterpieces are such unique masterpieces as "The Tajiks", "A Brief History of the Tajik People", "The Kushan Period and World Civilization", "A Study of Central Asian Civilization", "Historical Ties of Central Asia with the Arab East. ", "Al Pharaon in the History of Civilization", and "Alexander Macedonian and the East" can be proudly named . The book "Tajiks" written by the great intellectual , Hero of Tajikistan- Bobojon Gafurov makes the best and most indelible historical example, which had not lost its value for many years and its life will be endless. It embodies the history not only of the Tajik people, but also of humanity as a whole. President of the Republic of Tajikistan, Leader of the Nation Emomali Rahmon in his Address to the Majlisi Oli of the Republic of Tajikistan (26.12.2019) emphasized: "We should know who are our forbears, honour them and be proud of our Aryan generation.

In this regard, the Government is instructed to publish a book "Tajiks" at the expense of the Presidential Fund of the Republic of Tajikistan on the occasion of the 30th anniversary of state independence on behalf of the Head of State in order to deepen the glorious history of the Tajik people to every family in the country.

This respectful, humane and advanced initiative of the Head of State evinces respect for the national history and culture and the honourable sons of the nation . In terms of the visionary policy of President Emomali Rahmon, we Tajiks need to know and appreciate the glorious history of our people, to study the bright pages of heroism and bravery of our ancestors and to promote it. as the basis of patriotism and loyalty.

The scientific value of this fundamental work is enormous. Bobojon Gafurov through his many years of hard work has introduced us and the peoples of the world to the pages of colourful history of our people. The main result of long diligent work of academician Bobojon Gafurov in the field of historiography is that he proved that the Tajik people are the most ancient people of Central Asia and the Aryan people, a wise man who contributed to formation of national consciousness of the Tajik people. Bobojon Gafurov is a beloved son of the Motherland and the Tajik people. We can say with confidence that the good name of this great historian of the nation and the people will live forever in the memory of generations of the ancient, cultural and civilised Tajik nation.

The book "Tajiks" is a flame that shines the dark pages of the history of Tajik people.