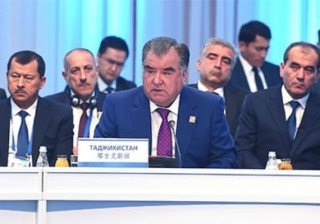 The election of the leadership of Tajikistan in relation to the current situation in Afghanistan is not accidental, because our nation passed a serious historical exam in the first years of independence and since then has received forgotten lessons for today and the future.

The lack of security and anxiety that has come to the head of the people of ancient Afghanistan today is the result of the intervention of foreign countries, that is, the activities of interested circles in the region and the world, which continues even now. Taking advantage of the instability of the current situation in Afghanistan, each of the most powerful states will strive to promote its political and geopolitical interests in the Central Asian states. Tajikistan, as a peace-loving country in the region, actively participates in the resolution of international conflicts through its peacekeeping experience, negotiations and consultations. Founder of peace and national unity - Leader of the Nation, President of the Republic of Tajikistan, dear Emomali Rahmon expressed his opinion on the state of the neighboring country and our friend – The Islamic Republic of Afghanistan, emphasizing the following: "We stand for the speedy restoration of peace and tranquility in this neighboring, friendly, kindred and ruined country by creating a comprehensive Government and taking into account the interests of all peoples and nations, the goodwill of all the people of the country, respect and observance of the rights of citizens within the norms accepted by the world community and the key role of the United Nations in promoting this process."

The situation in Afghanistan has a direct impact on the countries of Central Asia, and the security of our region primarily depends on the situation in this neighboring country. Peace, tranquility, political stability and national unity, which today are part of the glorious people of Tajikistan, have not been easy for us. The historical path that the people of Tajikistan passed, especially in the first years of independence, was filled with horror, tragedy, deprivation, difficulties and difficulties. At a time when our sovereign country is still taking its first steps, traitors of the Tajik people and enemies of the Tajik state advocated the support of foreign interested circles of our country in the maelstrom of strong internal confrontation, and then into the fire of the imposed civil war. The horror of the civil war can never be forgotten because of the crowds and pages of the country's recent history. During this harsh and terrible time, the activities of State structures and bodies were completely paralyzed, the system of public administration was abolished, the Constitution and other laws were violated, and the atmosphere of power, violence and violence dominated the country. The biggest tragedy in those days was the threat of the extinction of the young Tajik state and the collapse of the Tajik nation. The strong will, stable position and high wisdom of the Founder of Peace and National Unity - the Leader of the Nation, the President of the Republic of Tajikistan, the respected Emomali Rahmon, the people of Tajikistan complained about the abyss and ensured the processes of nationalization, the construction of the national statehood of the Tajiks. During the meeting, the sides noted with satisfaction the strengthening of bilateral cooperation between the countries and the expansion of mutually beneficial economic and trade cooperation. This is due to the fact that we are proud of our national identity, that is, Tajik, the history of more than 6000 years of our people, the sweet Tajik and poetic language, culture and ancient culture, the legacy of the eternal stay of our ancestors and national values, and are obliged to pass it on to future generations in a developed, developed and strengthened form.

One of the main threats of today and the future of the Central Asian region, including our country, are radical, radical and superstition. Taking into account the rapidly changing situation on the planet and the current situation of the world community under the negative influence of globalization factors, first of all, there was a need to protect national interests, state security, sovereignty, state independence and inviolability of the Republic of Tajikistan. In fact, humanity today, along with various natural disasters, is threatened by terrorism and extremism, considering its deepest consequences of the modern world, threatens the peace, stability and state independence of countries. We must take care of the peace and tranquility of the Motherland, the political stability of society and national unity, strengthen the security of the State, the rule of law and the peaceful life of our people with understanding, vigilance and honest work.

Due to the changes in our neighboring Afghanistan, which threaten the sovereignty and state independence of Tajikistan and the security of human society as a whole, today it is necessary, along with law enforcement officers and law enforcement agencies, all the healthy forces of society, to always be ready, respected, enlightened, vigilant and ready to defend the Motherland. The fight against terrorism and extremism must become a sacred duty and the fulfillment of the human and civic duty of every member of society!

Taibov S. A. - Head of the Information Department and Public Relations of SIE " Avicenna TSMU”