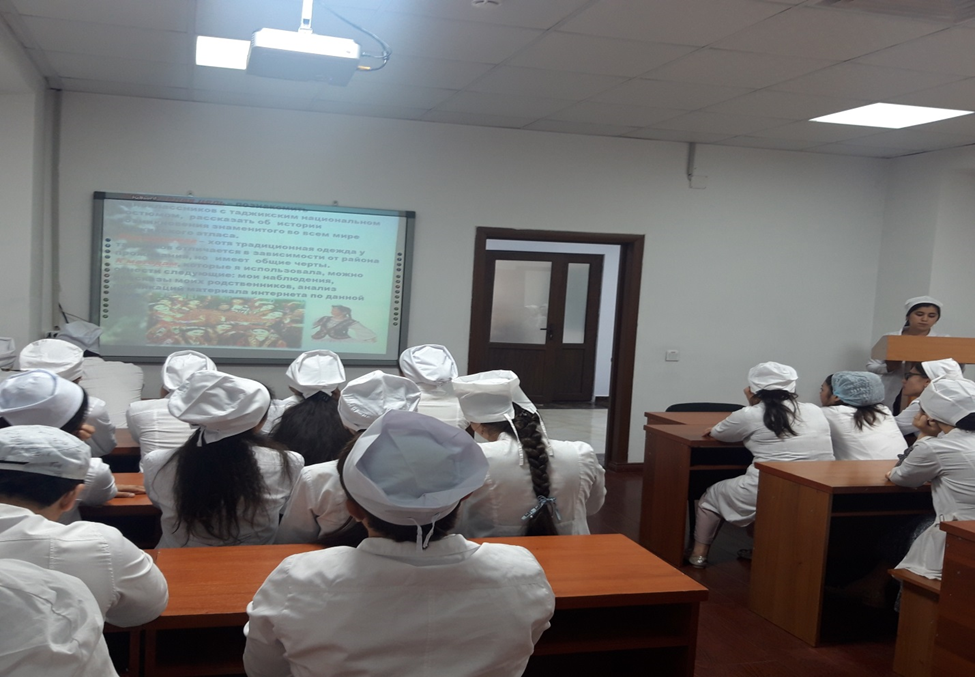 Women wear loose shirts made of plain fabrics. In the southern mountainous regions, especially in Darvaz and Kulyab, dresses were embroidered and were an example of folk art. Urban and low-income Tajik women wore local clothes and shoes. Women's clothing was similar to men's in terms of mandatory elements, which also consisted of a shirt ("shirt") and pants. The women's shirt was cut like a man's, but unlike the latter, it was much longer and decorated with expensive embroidery. "Dress" can be either plain or bright, colorful, decorated with a pattern.

Women's embroideries were usually made from two types of fabric: the upper part was made of cheap cotton fabric, the cotton fabric is more “breathable” for the body, and the lower part, visible from under the shirt, was more elegant and made of expensive fabric. Tajik women mostly retain traditional elements of clothing. Young women also wear bloomers, the leg part of which, unlike men's, is much wider. Traditional jewelry is combined with modern: necklaces, pendants, earrings, rings.

Men wore a tunic, wide trousers, joma, a scarf belt and a turban.

So, for the highlanders or lowland men were characteristic: a wide shirt - a "shirt" made of cotton fabric, trousers - harem pants, a dressing gown, a scarf and a hat on top.

The shirt was usually sewn from a piece of fabric, wrapped around the shoulder and cut in the middle for the neck. The sleeves were simply sewn to the body. It was a wide and restrictive product, which among ethnographers is called a tunic.

Trousers - harem pants ("ezors") were sewn wide, not constraining the step and narrow from top to bottom. The shirt was loose-fitting, with a belt tied obliquely at the waist. It should be noted that the scarf in this case also served as a belt and pocket, supported the pants and made a long shirt unusable. Men wore a robe ("chapan") over their shirt. For the summer, a lighter version was provided - without lining, for the winter - a denser one, on a wadded surface, which covered the entire are of the product. Dressing gowns were usually sewn from stripes or colored cotton fabric.

The inhabitants of the mountainous regions preferred to wear "chapans" made of undyed domestic wool, the collar of which was decorated with embroidery.

From the history of the Tajik atlas

The first mention of this issue dates back to the 2nd century AD, during the Great Silk Road. But nowhere is it specifically said about the example of this question. I asked my grandmother where this amazing picture came from, and she told me this ancient tale:

“In ancient times, one of the rulers of Margilan decided to marry for the fifth time. His choice fell on the daughter of a poor young weaver. The disappointed father of the girl threw himself at the feet of the old man and begged him to leave. Khan replied that if he did something extraordinary before the next morning, then Khan would forget the beauty of the girl, and fulfill the wish of the poor fellow. The weaver sat at the edge of the canal, not knowing what to do. And suddenly - I saw the reflection of the clouds in the water, which, after the last rain, turned into all the colors of the rainbow. "Oh Rai, thanks for the idea!" he shouted and ran home to get to work immediately.

In the morning he saw his extraordinary fabric - like a light cloud, cool, like fresh mountain air and shining with all the colors of the rainbow. When the master brought Khan this extraordinary fabric, and Khan was struck by its magical beauty: - How did you do it? he asked the weaver. The weaver replied: “I took the green of the rain-washed leaves, added the color of the tulip petals, the red of the morning, the blue of the night sky, and the light of the sun on the fast-flowing water. From the channel he added a sparkle in the eyes of my beloved girl and mixed it all up. The unusual fabric was called "khan-atlas" ("khan's silk") and the khan married the weaver's daughter to his beloved son.