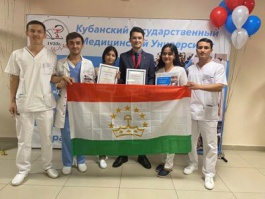 Students from the Avicenna Tajik State Medical University won the second International Olympiad "Master of Pediatrics," which was held in Krasnodar of the Russian Federation, they have received an Olympiad cup and diploma. As Farrukh Baqoev, an assistant of the children's diseases department №1 of the Avicenna Tajik State Medical University told to AMIT Khovar that the Olympiad was held in Krasnodar, Russian Federation, on October 28.

As Farrukh Bakoev noted, "Avicenna team consisting of 5 students from our university took part in this Olympiad. 22 teams participated in the final round of the Olympiad which 21 teams were from medical universities of Moscow, St. Petersburg, Kazan, Novosibirsk, Krasnodar, Vladivostok, Saratov and other cities of the Russian Federation.

In the Olympiad, participants competed in the following conditions: providing first aid in incurable situations, working with a virtual patient, collecting anamnesis and diagnosing the patient, performing specialized questions, intellectual questions and answers, and finding the most difficult problems.

The winners of the Olympics were awarded cups, diplomas and souvenirs.