Strengthening the sense of self-consciousness, national pride and patriotism of young people 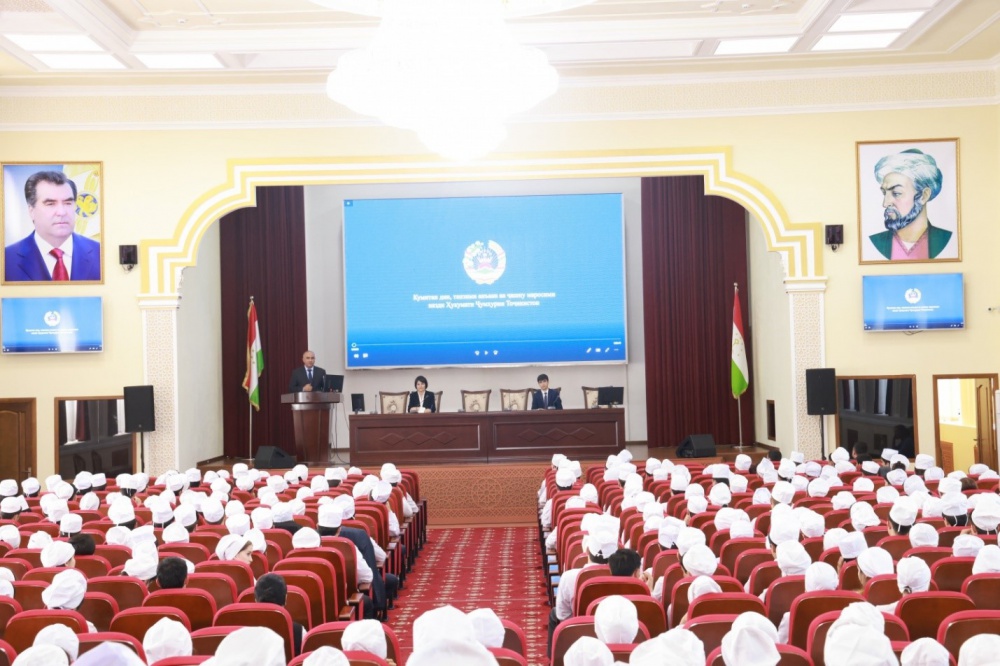 April 26, 2022 a meaningful gathering was held with the representatives of the Committee on Religious Affairs, Regulation of Traditions and Celebrations under the Government of the Republic of Tajikistan, faculty and students in "Sino" auditorium of the Avicenna Tajik State Medical University. The meeting was conducted under the guidance of the Vice-Rector for Educational Work Kurbonbekova P.K. who opened and explained to the audience the purpose of the event. Kurbonbekova P.K. He also added that in the light of balanced policy of the Head of State the country is out of political and economic crisis and its strategic goals are gradually realized. After the opening speech, the floor was given to the representative of the Committee for Religious Affairs, Regulation of Traditions and Rites under the Government of the Republic of Tajikistan Vahobzoda Abdurahmon

Vakhobzoda A. - Representative of the Committee for Religious Affairs, Customs Regulation and Ceremonies under the Government of the Republic of Tajikistan in his speech commented that one of the main and great achievements of independence is the importance of the great leader of the nation in the creative generation of the country. From the very beginning of acquiring its unique treasure, state independence, the Republic of Tajikistan has recognized the inevitability of forming and implementing state youth policy. It is not without reason that the country's younger generation calls the head of state the Leader of Youth.

Since the first days of independence, the Government and the Head of State have seen in the young generation a reliable backbone and future of the state and the nation and have expressed confidence in the strength and potential of this promising segment. Thanks to this growing concern, the active participation of honest and courageous youth as a creative force in important state and public actions is felt today more than ever. This is an indicator that the new generation of independence has extraordinary strength, talent and high organizational skills.

Our present youth, that is, the generation of independence, is fundamentally different in the level of science and knowledge, enlightenment and outlook, level of thinking and morality, which is all our pride. Indeed, it is the independence of the country and the peaceful atmosphere of the present conditions that have created a favorable and favorable environment for the education and activities of young people in our beloved homeland.

In modern times, the importance of science and knowledge is growing day by day, and they have become the essence of life for the existence, development, and happy life of peoples and nations. For the strength of a state and a nation is determined by the level of knowledge and enlightenment. A nation that values science, knowledge, culture and spirituality is a promising, strong and civilized nation. The development of all spheres of a country's life and people's standard of living depend, above all, on the level of knowledge and professionalism of people in society. Especially at a time when science and technology are rapidly developing and new horizons of technical and technological evolution open up every day. The experience of the developed world has proven that it is the interest in science and education, the technical and mathematical sciences, that has made them pioneers on the world stage.

In order to support and encourage talented and educated, patriotic and self-conscious young people, the Government of the country has provided all necessary conditions and opportunities over the thirty years of independence. The respected Leader of the Nation Emomali Rahmon regards the younger generation as the future of the state and the nation, the driving force of society and the strategic resource of the state and the government of the country, stressing the need for young people to study science and knowledge, and to avoid superstition and ignorance.

Strengthening the sense of self-consciousness, national pride and patriotism of young people