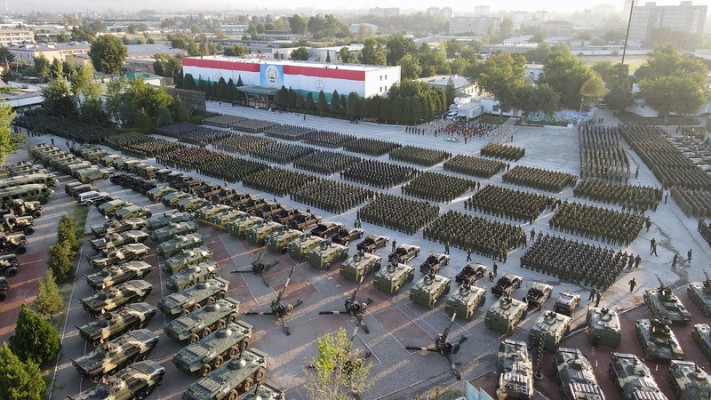 At four o’clock in the morning today – July 22, 2021 by order of the President of the Republic of Tajikistan, the Leader of the Nation, Supreme Commander-in-Chief of the Armed Forces of Tajikistan, Army General, His Excellency Emomali Rahmon, in order to verify the combat readiness of military units for the first time in the history of the independent state of Tajikistan throughout the country, 100 thousand officers and soldiers of the Armed Forces and 130 thousand officers and soldiers of the mobilization reserve were assembled and their combat readiness was checked.

In this event, held under the name «Marz-2021» («Border-2021»), 1023 units of military armored vehicles, 3167 transport and special equipment, 447 artillery and mortar vehicles, 234 air defense equipment, 45 military and transport aircraft and helicopters were mobilized in operational directions to the regions of the combat mission.

The event was held nationwide and concluded at seven o’clock in the morning with high-level results.

After completion of the event, His Excellency Emomali Rahmon arrived at the National Guard base.

After the performance of the National Anthem, the President of the Republic of Tajikistan, His Excellency Emomali Rahmon delivered a speech to the members of the Armed Forces of the country, including the personnel of the Border Troops, the National Guard, other military structures and law enforcement agencies, and congratulated those present on the occasion of the 30th anniversary of state independence.

It was emphasized that in the extremely difficult conditions of the region and of today’s peace, the protection of the security of the Tajik people and the Tajik State, the atmosphere of political and social tranquility, that is, peace, political stability, national unity and cohesion of the nation, is of paramount and fateful importance for our statehood.

The Head of State His Excellency Emomali Rahmon stressed that the fight against terrorism and extremism, drug trafficking, arms smuggling and other transnational organized crimes is also a priority at this stage.

The situation in our neighboring country, the Islamic Republic of Afghanistan, especially in its northern regions bordering our country, remains extremely dire and unpredictable, and the situation is becoming more difficult every day.

In connection with the unstable situation in the region, the Head of State stressed that we must always be ready to protect peace and tranquility, political stability, national unity and security of our state and people, that we got at a heavy price.

The armed forces, which comprises of all military units, as well as law enforcement agencies of the country, were instructed to ensure their combat readiness at the highest level to prevent and confront real and potential threats and to take urgent and decisive additional measures in this area.

The President of the country His Excellency Emomali Rahmon has stated that the main task in the current difficult situation is to ensure reliable protection of the state border and mobilize all forces in this direction.

The Head of state emphasized with confidence that our brave and courageous border guards will continue to fulfill their sacred task with honor, in other words, they will reliably guard the state border with the Islamic Republic of Afghanistan.

After President Emomali Rahmon’s speech, by order of the parade commander, the military parade began with the participation of 10 thousand servicemen of the country’s Armed Forces, law enforcement agencies, as well as officers and soldiers in the reserve of the Armed Forces.

It should be noted that the army or the Armed Forces are a solid foundation of any independent country, the guarantor of the security and peaceful life of its people at all times.

From the first days of the formation of the National Army, the state and the Government of the country have been taking concrete measures to create and equip military units, organize the branches of the Armed Forces, provide them with personnel and improve the military training of servicemen.

The country’s national army in a relatively short time has become a powerful military force capable of protecting the interests of the independent state and ensuring peaceful life for the people.

After President Emomali Rahmon’s speech, a military parade of personnel of the Armed Forces and law enforcement agencies took place.

There were demonstrated heavy military armored vehicles, mobile artillery and other modern military equipment at the disposal of the country’s Armed Forces.