At the department of propaedeutics of children diseases of SEI «ATSMU» 14.03.22 year an open lesson was held on the topic of ” Navruz Holiday” with the participation of teachers of the department and students of the 8th group of the 2nd year of bachelors (teacher – Kasimova P.V). Presentation was prepared by students of group 8th Anand Sreerekha Aadithiyan. 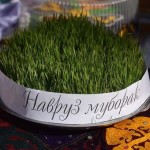 The Holiday takes place in the day of vernal equinox according to Solar calendar, which was composed by Iranian nations seven millenniums ago, long before the origin of Islam According to this calendar, the year started on 20-21 March, in the day of vernal equinox, when the nature revived, and the spring finally started. There is a legend, that even the First Man (Kayumars) was created just in the moment of equilibrium of the day and night.

In the first years of Arab ruling, Iranians were taxed for celebration of such ancient holidays, as Navruz and Mehrgon. Khadis state, that the prophet himself celebrated this holiday, Omeyads and Abbasids, who did not repel taxes from conquered nations, they arranged celebrations with unusual pomp, and it helped to preserve the ethno-national traditions of Persian people.

Navruz is the holiday of revival not only of the nature, but of Spirit as well. The ritual of commemoration of Siovush is observed even now, it is linked with old Tajik version of heathen cult. It reflects the seasonal calendar cycle of the life of plants, annually fading in the autumn, vanishing in winter and blossoming again in spring.

The revival spirit of Navruz culture mostly prominently is expressed in ancient custom, which was reported by Arabic speaking authors. Festal cloth (dastarhan) for the king should have obligatory seven branches of seven fruit trees. The following tags were attached to the branches, as: «afzud» (increased, enriched), «afzun» (being increased, enriched), «afzoyad» (will increase, enrich) , and so on.

In ancient times Navruz was divided into two types: national, universal Navrus, which was celebrated the first 5 days, and special Navrus, Navruz-i hosa, which in original manuscripts is also called Great Navruz Navruz-i buzurg. It starts on the 6th day and was celebrated very widely with luxury. In this day the king’s residence was open for receiving the gifts from citizens. By the end of this day, the imprisoned were released, the convicted were acquitted, and they also joined the celebrations.

The first thing to be done when it became warm “garmo”, is «cleaning» of the house from everything which is «dirty», «heavy», and also they rooted out flowers from the greenhouses and planted into the ground, and were very happy. For 2-3 days before Navruz they swept the floor thoroughly, and cleaned homes and yards, even washed ceilings, cleaned carpets, felt mat, utensils, burnt unnecessary things. In many villages the manure, which was stored for winter, was took out to the fields as organic fertilizer. In Darvaz, in Pamir they opened the closed by this day ravzan, ruz (the window in the ceiling in main room chid). «Purified» was not only «the sole», but everything, which surrounded it, all material things as well.

Before Navruz it was required to repent one’s sins, reconcile with enemies, and forgive debts. In Navruz day the kind angels - farishta bring abundance and prosperity to those, who have pure thoughts, light soul, who has clean home, because the people believed that clean environment surrounding any person reflects clarity of his internal world. The people believed that angels would not enter the dirty house.

It was obligatory to wash clothes, especially children clothes, as children considered to be exposed more to evil eye, and the water should clean all. Even before Islam, one week before Navruz was devoted to the souls of ancestors. They were commemorated, given gifts and they were asked for help in future year, protection from troubles. 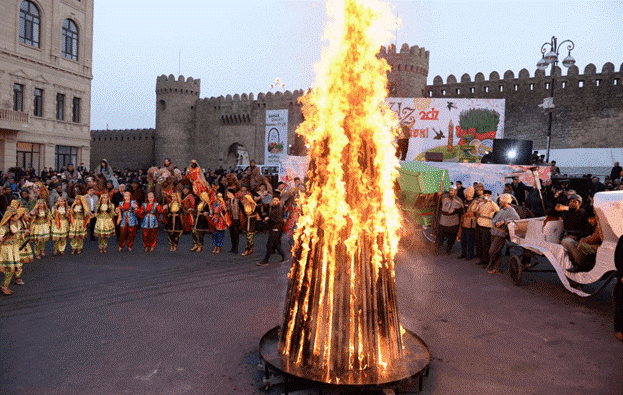 The symbolic ceremonies of cleaning preceded the New Year. On "Gladness Wednesday" (last Wednesday before Navruz) they burnt fires in the streets of towns and villages, and people had to jump over one fire seven times (alovparak), and one time over seven fires. In the last night of the old year it was a tradition to sprinkle with water each other, and jump over the running water, in order to clean up from last year sins. 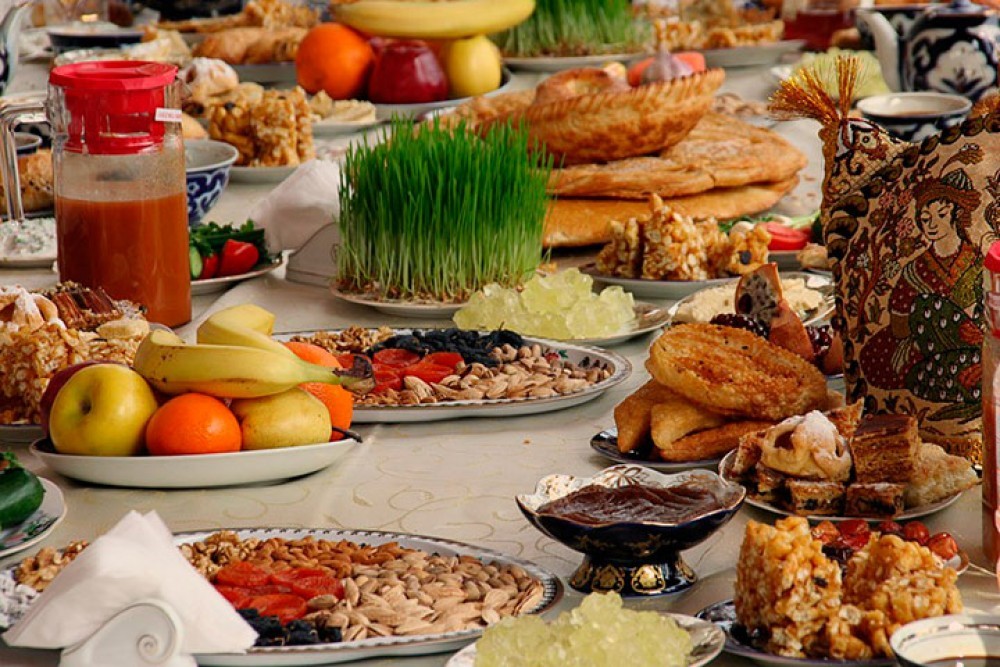 The Holiday itself started when it was dark, the whole family put new clothes, and gathered at the table, which was called haft-sin. First a mirror was put on the table cloth, which reflected the past and the future, vessels with water and alive fish, which bring happiness; pomegranate or apple and some silver coins, sprayed all with pink water (gulabpash). The holiday table clothes han-i navruzi were decorated by the family with seven dishes, starting with the letter «s». Obligatory on the table there should be seven haft products, their names should start from Arabic letter "syn": seeds of rue- sipand, apple - seb, black nuts - siyahdane, wild raspberry – sanjid, vinegar - sirke, garlic - sir and sprouted grain - sabzi. It is considered, that seven «syn»(s), have links with Zoroastrianism angels, which are called sipandon sudrason, which means «pure and healing, wholesome».

Long before the holiday starts, about two weeks prior, the wheat or lentils is sowed on the plates. Their green sprouts should reach 5-7 sm. before the Holiday and become the decoration of the table, the symbol of birth of new life, New Year. Magic seven products on the table become symbolic gift to the Son, which takes this gift, and should take care of rich yield harvest.

Navruz is the most ancient New Year holiday on Earth, and its history amounts to 3-4 millenniums. Literary monuments state the legend that origin of Navrus is linked with legendary Persian Padishah Djamshed. His great grandfather, Persian King Kayumars, who is considered to be the First Ancestor of the whole humanity, gave names to the days, years and months. Having identified the day and the moment (morning), when the Sun enters the constellation of Aries, he ordered all the priests (mubadam) to start the calendar from this moment.

His great grandson traveled a lot round the world. Having arrived to Azerbaijan, he gave the order to build the throne on the highest mountain at the level of sun, and decorate it with gold and jewelry. When the sheikh sat into the throne, his radiance, and also shining of his crown together with the Sun lighted up the surroundings with marvelous glitter. The amazed nation called this day as a new day (Navruz) in the honor of their sheikh and gave the name Djamshed to their governor, which means "shining" и "radiant". Djamshed organized the feast, and called it Navruz, and ordered people to celebrate it every year as the beginning of year. The sheikh ordered the people to clean their houses, make ablution, as Almighty likes cleanness. That day Djamshed cut the sugar cane and drank its sugar. From that time during celebration of Navruz, according to traditions, people when meet, treat each other with fruits and sweets.

Different countries celebrate Navruz differently: in Iran - they celebrate it 13 days, in Tajikistan - 5-6 days. In the end of the holiday they go out to the open nature to join it, and it is called «sezdah ba dar» (thirteen day outside the home, in the nature). Navruz symbolizes revival, peace, merry and victory of kindness over the evil. It has extremely rich ceremony culture. 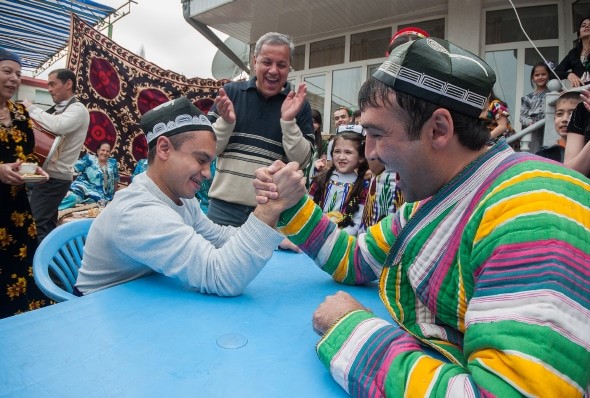 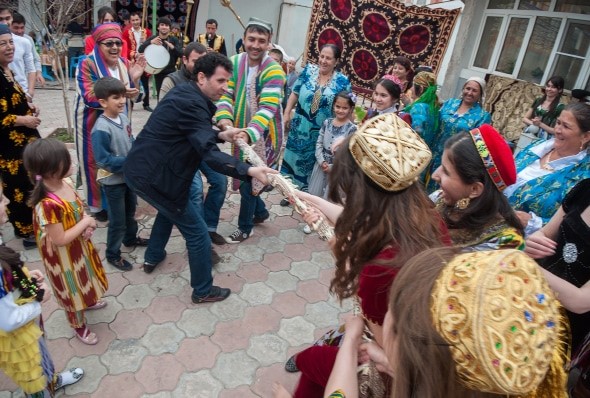 Navruz was people’s holiday. People made simple and unsophisticated craft ware, the whole population was involved in creating the craft ware –from craftsmen to simple ordinary people. They tried to prepare for long expected celebration the ancient images of animals and birds, forerunner of spring, by legend, they bring prosperity and wealth. On the eve on Navruz in Bukhara they manufactured statuettes from burnt mud and wood. They were purchased at once by local citizens. Such practice is preserved in Pamir, where women from model or shape animals from dough with the hope for rich harvest year and prosperity in the new year. In Karatag and Istravshan for holidays the potters manufactured the penny wistle hushtak from burnt mud in the form of birds, horses, sheep, fantastic animal (lion) or aspaki. In Karatag ritual figures sometimes were coated by green glaze or painted after baking in yellow color with red strips and spots on it, in Istravshan they were decorated with white paint with red, blue strips, spots. Very rare they remained even unburnt.

The reproduction of the certain images inside home was considered as magic way to attract the forces of kindness and God’s divine grace. In Khatlon on the walls they painted flowers, horn of the sheep or the branch of cypress, in Pamir women left the impress of their tight hand palm, besmeared with leguminous flour, on the central main post, which personified the God creator Murtazo Ali, and pronounced new year celebrations, set hopes for God’s trade. 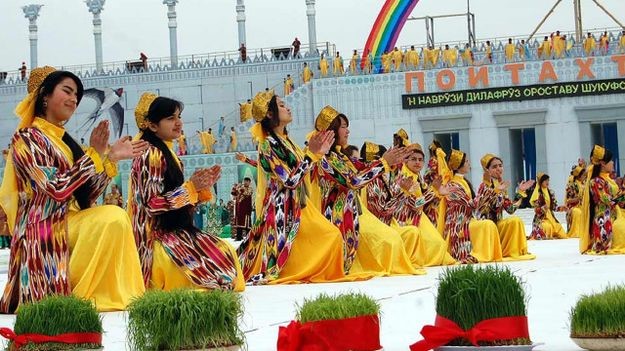 Initially Navruz no doubt was a carnival because it was national holiday. Prior the holiday they organized impressive performances in the streets, people put masks on, the king of ritual ceremony was elected, and the celebration was arranged in his honour. Dancers, musicians sang folk songs, acrobats organized contests. As a custom, all people during the days of holidays decorated eggs with golden ornaments or plot miniature painting and send them as presents to their relatives and friend 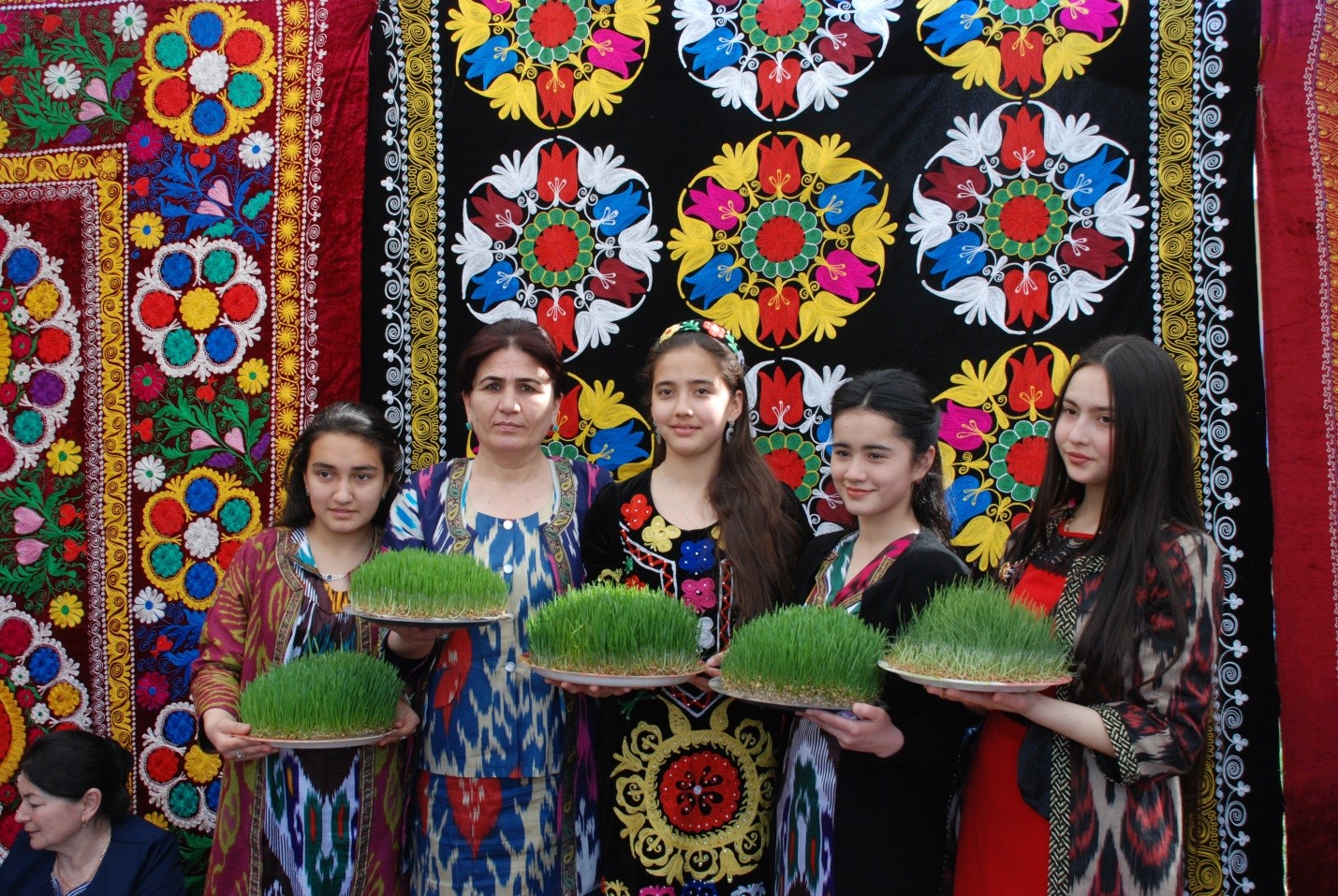 The moment when Navruz comes is the most important in the annual cycle, that is why all ritual actions were performed during New Year celebration with special assiduity, they had important, and as considered, critical meaning. Before the New Year (holiday comes, early spring (about 10-15 March) when new flowers started to blossom 10-20 boys, aged 8-15 years visited houses. One of them carried a pole with the length a meter and a half, at the end of this pole the bunch of various spring flowers was fixed: snowdrops, iris, etc). Everyone was carrying flowers in their hands or the flowers were stuck behind ears. The boy, who carried the pole, stopped near every house of his neighborhood, sang songs, different in different regions of Tajikistan: «Gulgardoni-«Calling spring» in the southern parts of Tajikistan, «Boychechak» ‘snowdrops” in the northern parts of Tajikistan, «Hil Hil-i bulbul- Tender nightingale») in Shahrisabz, «Boikandak»- (Picked much flowers») in Zerafshan valley, «Bahor omad-«The spring came») – in Sary-Assiyo district of Uzbekistan, where Tajiks were living. 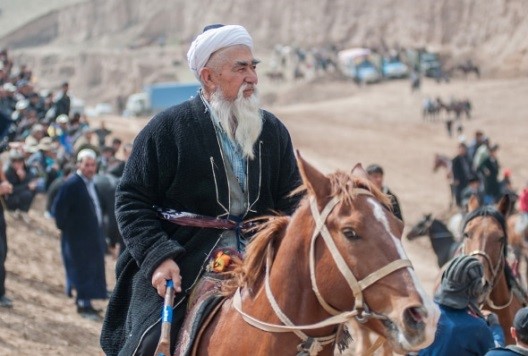 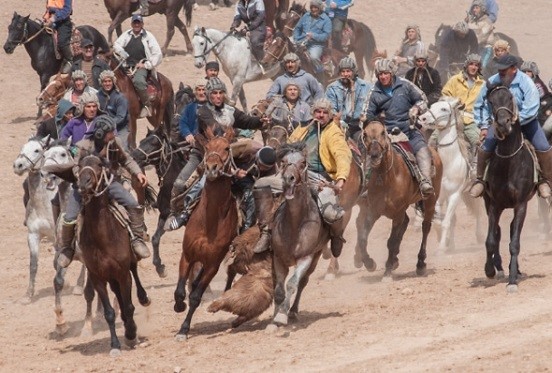 In all regions of Tajikistan women played doira (drum), chang, danced, swang at swings, which were called differently in various regions: «hoi» (Kulab) “arguchak” - (Garm), «bod»- (Zerafshan), «alvonch» (Bukhara), «bodbarak», «hoiravak» -in Pamir. It was believed that swinging in the swings is “savob» (godly, virtuoz), and that’s why in holidays days even elderly women swang in swings. It is known, that swinging in the swings had magic meaning, it served as ritual of purification. People believed, that by high swinging it is possible to expel the evil ghosts and demons, and also to achieve high yield of harvests. 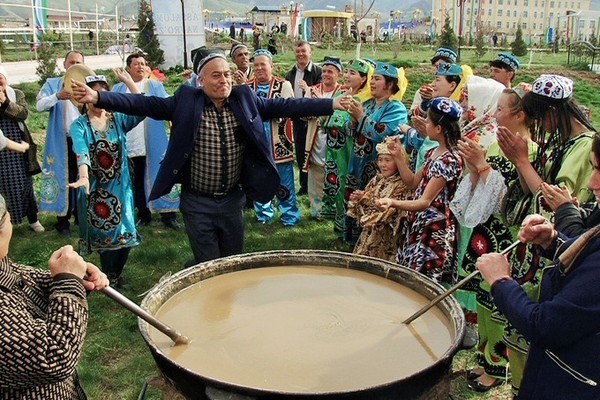 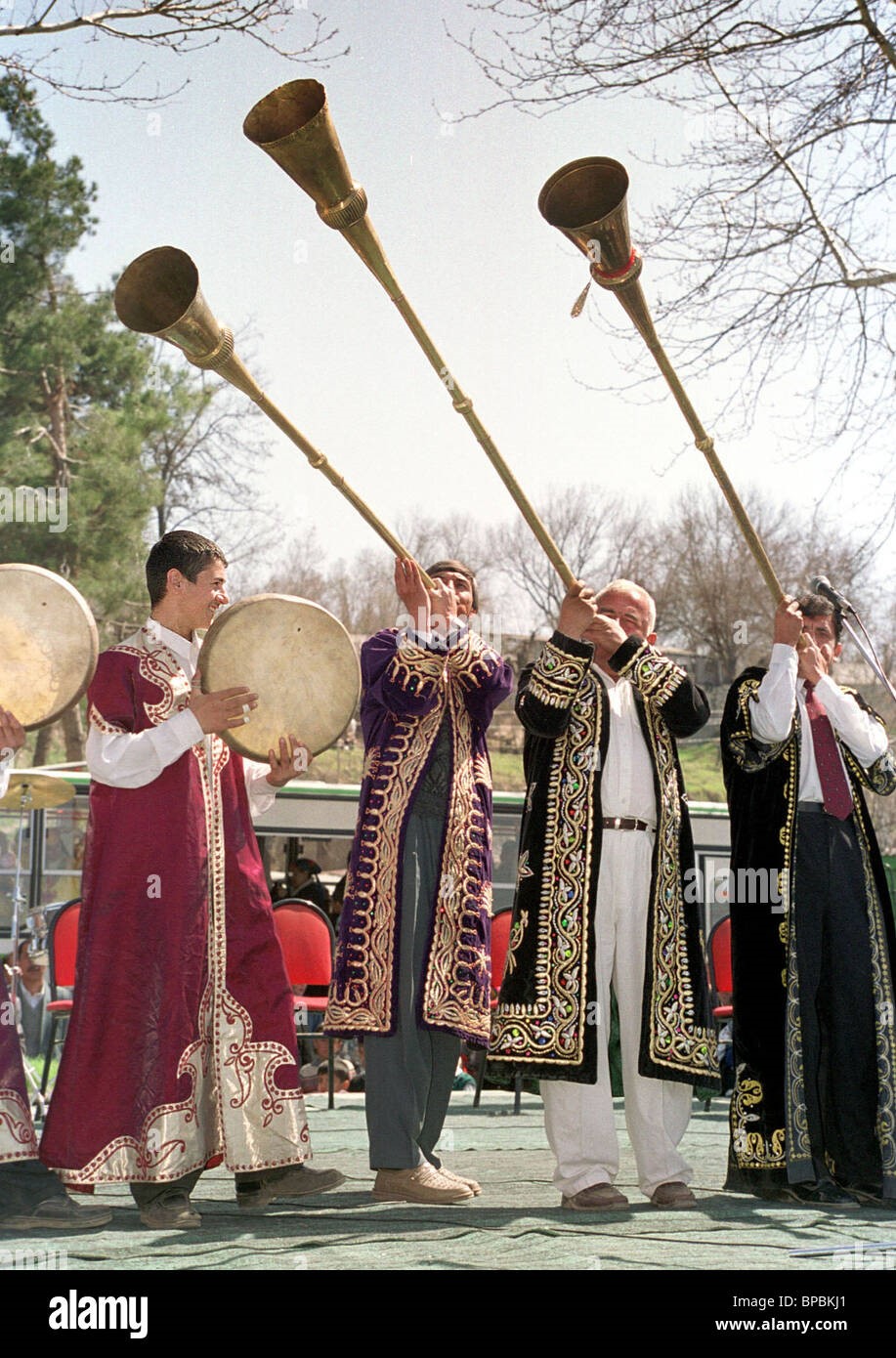 The creativity, linked with a holiday of a vernal equinox, is not exhausted even until now in Tajikistan. These days here they recollect ancient symbols, images, trying to recreate the forgotten or disappearing signs of Navruz. Girls sew dresses for the holiday, combining together modern and traditional design of the dress. Demonstration of models take place in many stages in the regions of Tajikistan. 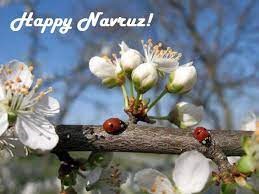 In September 2009 Navruz was included into the UNESCO representative list of a non-material cultural humanity heritage, and in the end of February 2010 the 64 session of UN General Assembly declared 21 March as "International day of Navruz". The culture of this holiday is based on the values, which constitute fundamental, spirituality of any nation. Just for this reason Navruz became the world, universal holiday on the planet.