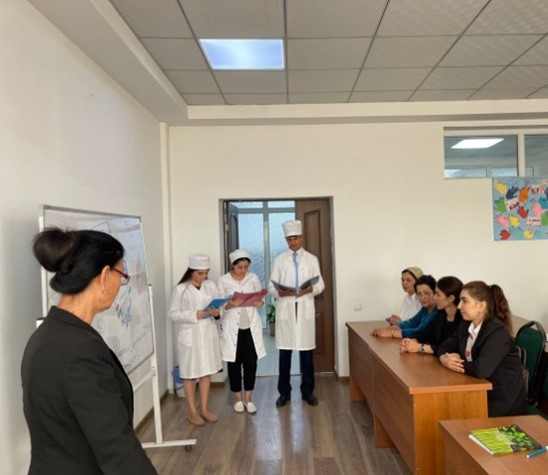 October 3, 2022, a mini-conference was held with the participation of teachers and students at the department of foreign languages ​​of SEI “ATSMU” on the event of the State Language Day “National language is the most important symbol and pillars of our governmental and political independence”. The head of foreign languages department c.ph.s., associate professor Mukhamadieva Z.A. made a speech in it and noted that in our country every year on October 5, the Day of the State Language is celebrated and on this occasion she congratulated everyone and wished each of them health and happiness.

In the world, our nation is known primarily through its state language, national unity, and its invaluable cultural wealth.

It is worth noting that its preservation, protection and storage is not only the duty of state bodies, but also the duty of every citizen of our Republic of Tajikistan.

The existence of each people and nation is primarily related to its language. Language is the passport of the nation and the unique wealth of every nation and state. Language is a means of communication and a link between past generations and present generations. Writers, thinkers, poets and sages have told a lot about the language and its importance in the world.

If everyone should speak his own language best

Learning a hundred other languages will be easy.

Since the celebration of the language has become a tradition in the Republic of Tajikistan and the Language Day is celebrated every year on October 5.

The state authority found the language law once again proved that Tajiks, although they were deprived of their language during the era of the Soviet Union, and all peoples and nations spoke Russian, and as a result of many efforts and hard work, this achievement and success became the lot of the Tajik nation. Fortune smiled on the Tajik nation and the poem of Maulana, who said:

Anyone who is far from his origin,

Let him live his life again.

The rite of life and daily life in the historical periods and social and cultural failures in the era of the Soviet Union always made our forefathers to believe that one day the Tajik language will have a state status and the Tajik nation will have its own land in a certain land with certain geography, to become the owner of the national emblem and flag, to think.

Yes, if the water breaks into a hundred pieces,

It will be familiar again.

This familiarity won again and united the disunity and integrity of the language. Attention and special attention to the language increased more and more. The language law created the basis for political independence, because political independence cannot be established without having a state language. Therefore, it is necessary for every citizen of Tajikistan to respect his mother tongue and to teach others to embrace it.

For more than a thousand years, the Tajik people have been speaking in the elegant Tajik language, recording their unique culture as a green line from one book to another book of history. Poets, writers and scholars of the world, such as Rudaki, Firdavsi, Abuali Sino, Nasiri Khusrav, Kamali Khujandi, Hafiz, Saadi, Bedil, Ahmadi Donish, Aini and others created their eternal and enlightened works in the Tajik language and increased the fame of this language even more.

The celebration of the language, which has become a tradition and a national celebration, began with the approval of the Law on the Language of the Republic of Tajikistan. That day, July 22, 1989, when the session of the Supreme Council of the Republic of Tajikistan announced the adoption of the Language Law, is an unforgettable day for the Tajik nation. Therefore, writing and knowing the rules and regulations of the language ensures the existence of this main pillar of the nation. In addition, it is necessary to have endless loyalty and love for our mother tongue, because the revival of the language will be our most valuable legacy to future generations.

The national language and its continuous formation in the state status are the most important symbol and pillar of our state and political independence. It should always be remembered that throughout the tragic past, our language has done a great and historical service for the survival and existence of the nation, the glory and majesty of statehood. Posted by the Leader of the Nation, the President of the Republic of Tajikistan, Honorable Emomali Rahmon, October 5 has been included in the list of national holidays as the Day of the State Language. The linguists of our country are well aware that the Law on the language of the Republic of Tajikistan was adopted for the first time at the tenth session of the Supreme Council of the SSR of Tajikistan on July 22, 1989, and was celebrated every year throughout our country. The reason for celebrating this national holiday on October 5 has important factors. First of all, the date of July 22 coincided with the summer vacation of all levels of educational institutions of the republic and the vacation of people of education and culture, intellectuals and employees of institutions and organizations, which made it impossible for these segments of society to participate in this national celebration.

Another thing is that the provisions and standards of the Law on the State Language of the Soviet Republic of Tajikistan were not satisfactory for the complete provision of the needs and requirements of the society for the quality of the state language in political, economic and social affairs, the creation of laws and regulatory acts, science and education, culture and internal and international relations. Also, the current Law did not take into account the norms of using other languages, including the languages of the national minorities of the country's inhabitants.

Therefore, there was a need to adopt a new Law of the Republic of Tajikistan "On the State Language of the Republic of Tajikistan". This law regulates and establishes the prospects for the development of the state language based on the standards established in connection with the legal status of the state language, including the standards for the use of other languages in the current conditions of the country's internal and external relations.

The destruction of the language is the destruction of the nation and the nations that speak it. In the era of globalization dangers for small and large nations and peoples of the planet, the disappearance of the national language of large peoples and nations, the acceptance of foreign languages ​​as a state and business language should be a lesson of historical immortality for all speaking nations. The influence of powerful languages, an immense desire for foreign languages, confusion and indifference to language, excessive attention to advanced modern technology can be a factor in creating the dangers of globalization. Language as a part of national culture has a long history. History has proven that our ancestors had one language - Aryan language - thousands of years ago. With the passage of time and the passage of centuries, other languages ​​emerged from the branches of the Aryan language, depending on the time and place.

The Tajik language is the state language of the Republic of Tajikistan and has been gradually formed and improved over the centuries despite many difficulties. The new era of the history of the Tajik language began in the VIII-IX centuries AD and played an important role in the development of the literary standards of this language. At the beginning of this period, the Tajik language (Persian or Dari Persian) became the state language under the Somonians, and since then, this language has developed in all literary styles. For more than a thousand years, the Tajik-Persian language was considered one of the largest scientific and international languages.