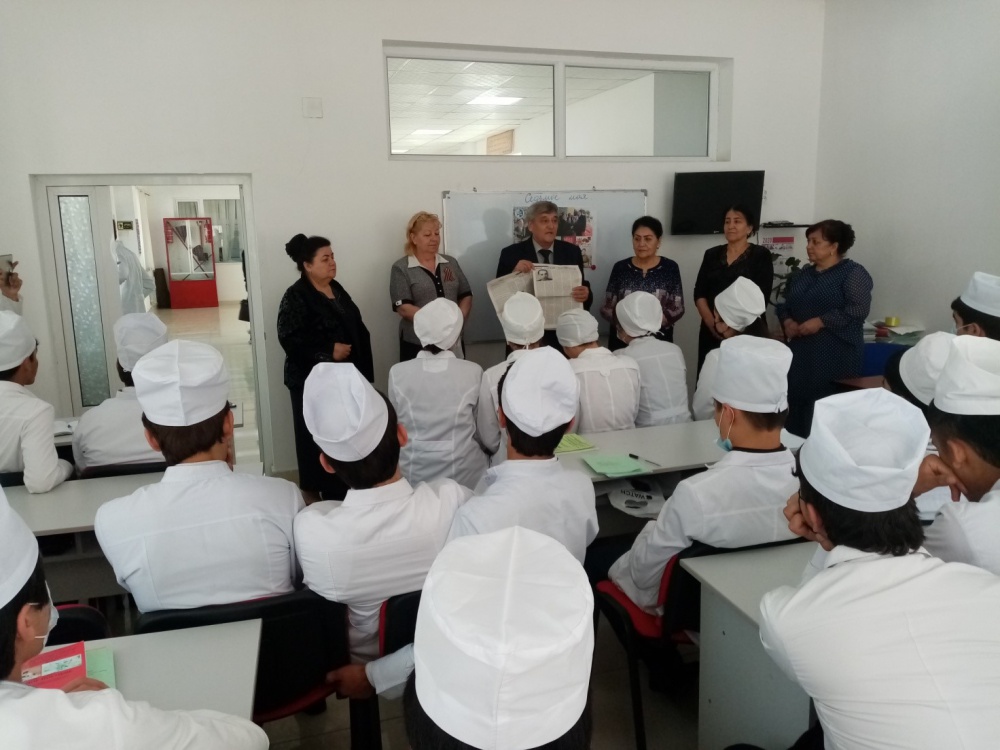 From May 1 to 7, 2021, a student scientific and practical conference dedicated to the 76th anniversary of Victory in the Great Patriotic War was held at the Department of Foreign Languages ​ ​ of the SEI "ATSMU."

The conference was attended by students of 1 and 2 courses of all faculties and curatorial groups.

The student scientific and practical conference was opened by the head of the department, Professor U.R. Yuldoshev. With a welcoming speech, He expressed deep gratitude to all those present, congratulated them on the Workers' Day - May 1 and Victory Day - May 9 and wished them all the benefits and success in their studies.

The importance of this historical event - said Professor U.R. Yuldoshev - is only increasing every year. Today, everyone needs not only to recall once again the undeniable feat of the people, but also to understand the results and role of Victory in the context of the modern history of mankind.

At the present stage of the development of education, the task of higher educational institutions is to teach today's student youth to systematically work, study and prepare themselves for independent life, keep folk traditions, historical memory, because without traditions, without glory, without memory, without high ideas, it is impossible to become a highly qualified specialist morally and spiritually rich.

In their speeches, students of the 1st year noted that May 2021 will mark 76 years since the end of the Second World War. For the peoples of the CIS, including our people, this war was a difficult and dramatic event that no one will ever forget, because there is not a single family that has not suffered from the war.

Highly appreciated the activities of the former head of the military department, «ATSMU», a veteran of the Second World War, medical service colonel M.A. Marchenko, who in 2005 at the age of 85 defended his thesis. WW-II veteran, retired colonel, M.A. Marchenko, until the end of his days was a vivid example of imitation for our student youth.

In achieving this Great Victory, there is a certain share of the Tajik people, and in particular, medical workers of the republic and health authorities - students of the 2nd year noted in their speeches.

With the outbreak of war, Tajik doctors committed a truly international feat, taking an active part in the reception and placement of evacuated people, hospitals, medical and other institutions.

Teachers M.R. Nazarova, H.I. Khayrova, S.A. Khotamova, M.A. Kholmatova, Z.I. Sharipova, D.H. Sultonova and others told that medical workers of Tajikistan provided assistance to workers and employees of industrial enterprises. At large industrial enterprises of defense importance, medical units and health centers were organized. Many citizens appealed to the military registration and enlistment offices with a request to send them to the front-line units. This is a statement to the military enlistment office of the Oktyabrsky district of the city of Dushanbe written by one of the first Tajik doctors, ZikrulloPochaevichKhodzhaev, who then worked as a resident of the surgical department of the Republican Hospital: "I assure the Tajik and Soviet people that I will serve as required by the military oath. Always ready to comply with the order of the People's Commissar of Defense. Convinced that victory will be for us. "

Highly appreciating the contribution of healthcare, - teachers Z.A., Muhamadieva M.A. Kayumova, S.K. Khamroeva, D.M. Najmiddinova and others noted in their speeches - the Soviet Government appreciated the contribution of medical service to the Victory of the Great Patriotic War. Among military medical workers, 47 people were awarded the title Hero of the Soviet Union for outstanding exploits. The university is proud of its pet - Lieutenant Colonel Anatoly Tolmachov, who gave his life for the freedom and independence of the Motherland. He was posthumously awarded the title Hero of the Soviet Union.

Summing up the work of the conference, Professor U.R. Yuldoshev noted that today, meeting the 76th anniversary of the Great Victory, we must remember the cost of this Victory to our peoples, that such qualities as patience, courage, the greatest endurance, love for the Fatherland helped the peoples of the former Union overcome the enemy. So let these fire-tested qualities always accompany us in later life. Victory in the Great Patriotic War is a feat and glory of the multinational people of the great power, no matter how the assessments and even the facts of our history change in recent years. May 9 - Victory Day - remains unchanged. Eternal glory to the winners!

Senior lecturers of the SEI "ATSMU." «Department of Foreign Languages»