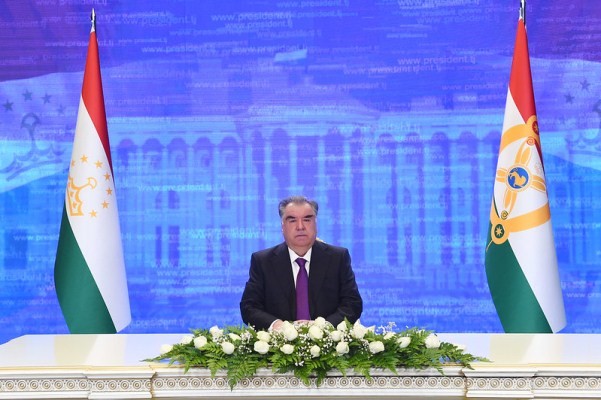 I sincerely congratulate you on the significant date of the historic day-the Day of the National Flag and wish that the national flag of beloved Tajikistan in the atmosphere of peace and stability of the country was always waving, and that the people of the country led an even more dignified and prosperous kind.

This year we celebrate the National Flag Day in a truly historic year for the entire people of Tajikistan - the period of independence and freedom of our Motherland.

In the thirty years of independence, dozens of great objects of the century, hundreds and thousands of important industrial and social facilities were erected in our country under the dust of the National Flag, all of which are the fruit of the patriotic labor of the country's residents, contributed to the sustainable development of the national economy, strengthening the potential of the state and unprecedented prosperity and prosperity of our beloved Homeland.

The national flag was adopted as a symbol of the independent Tajik state on November 24, 1992 at the 16th session of the Supreme Council, during which the fate of the new Tajik statehood was worked out, the first steps were taken towards ensuring peace, tranquility, political stability and national unity, as well as to achieve national goals.

It should be noted that since ancient times, the flag for the ancient Tajik people has been a symbol of statehood and patriotism, the personification of the national mentality, pride, honor and dignity, conscience and proud children of our peoples diligently defended them.

Tajiks in their recent history have become a full member of the United Nations, other influential international organizations and organizations, and have established friendly relations and cooperation, including diplomatic, economic and cultural ties with most countries of the world.

It is gratifying that today, along with other Member countries of the United Nations, the flag of independent Tajikistan is located at the building of this authoritative international organization.

The national flag, expressing unity and cohesion, conscience, patriotism and national identity of our cultured people, reflected the dreams and aspirations of Tajiks in the reflection of their colors.

Being the owner of the national flag in the modern world is one of the main symbols of sovereignty, freedom and independent statehood.

In this regard, along with other sacred national symbols, tribute to the flag and respect for which is the duty of conscience of every citizen of Tajikistan.

In order to honor the sacred national symbol, on November 20, 2009, the Decree of the President of the country declared November 24 -the Day of the National Flag of the Republic of Tajikistan.

In addition, in order to honor the National Flag and strengthen the national sense of patriotism of the country's residents, primarily teenagers and youth, dozens of squares and squares have been built in recent years in regional, cities and districts, as well as in cities and villages of the country, in which this symbol of the independent state of the Tajiks.

The national flag today, as a symbol of Tajik statehood, was installed in the building of all state and administrative departments, organizations, institutions, enterprises, educational institutions, sports facilities, offices and residential buildings of citizens, inspired our people to a comfortable, fertile life.

In this regard, I remind you that each of us should develop a sense of respect, pride, love and loyalty to the sacred national symbols in the minds of our children since childhood, since state symbols, including the flag, are the embodiment of the glorious historical past and bright future of our people.

We are obliged to protect our national flag, to honor it as a manifestation of national statehood, independence, freedom and priceless national value.

I also remind you that the national flag as a symbol of the sovereign and sovereign state of the Tajiks should be the main symbol of every patriot, patriotism, and honesty of society.

I am sure that all residents of the country will continue to further expand the creative and creative process with the kindling of the national flag for even greater prosperity of our beloved Homeland, strengthening the economic potential of our sovereign state and increasing its authority.

Once again, I sincerely congratulate all the citizens of dear Tajikistan in honor of the Day of the National Flag – the sacred symbol of the sovereign Tajik state, I wish every home of the country health, well-being, happiness and prosperity.