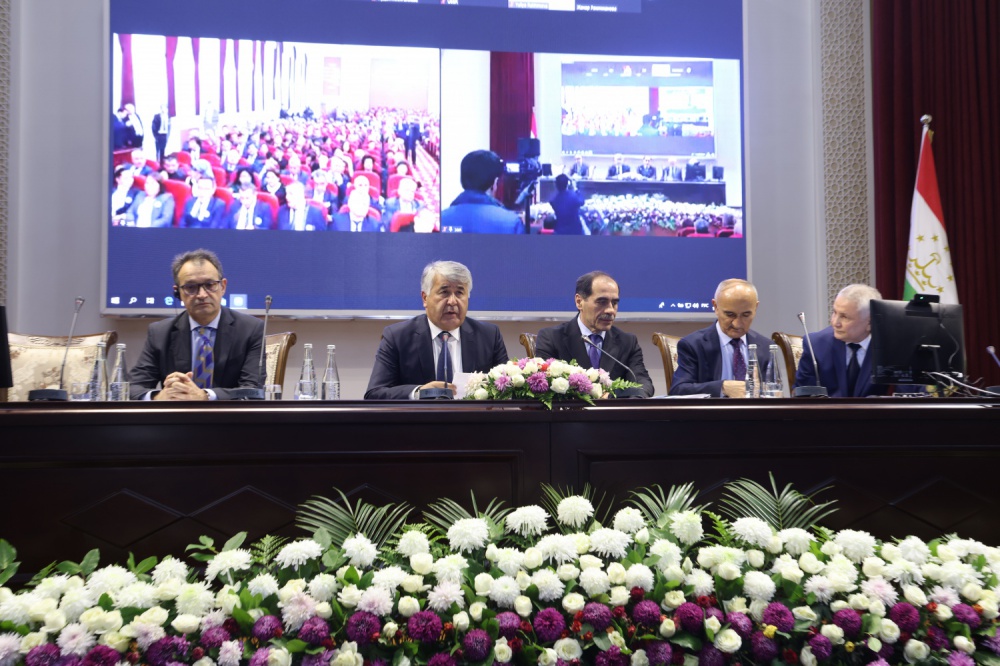 Today, on November 17 of this year, the 69th itl-practical SEI conference "Avicenna TSMU" was held at the Tajik State Medical University named after Avicenna with the participation of scientists and doctors from inside Tajikistan on the topic "Achievements and problems of fundamental science and clinical medicine", dedicated to the 30th anniversary of the state independence of the Republic of Tajikistan and the years of rural development, tourism and folk crafts, which was attended by the Minister of Education and Science of the Republic of Tajikistan Muhammadyusuf Imomzoda, First Deputy Minister of Health and Social Protection of the Population of the Republic of Tajikistan Gafur Mukhsinzoda, Vice-President of the National Academy of Sciences of Tajikistan Alijon Ghoibzoda, Rector of the Tajik State Medical University, Professor Mahmadshoh Gulzoda, Head of the representative office of the World Health Organization in Tajikistan Viktor Olshavsky and teachers and students attended of the university.

As the Founder of Peace and National Unity-the Leader of the Nation, the President of the Republic of Tajikistan, dear Emomali Rahmon, at a meeting with healthcare workers (08/18/202020) said“ "The healthcare sector is one of the priorities of the social policy of the State of Tajikistan, has been successfully developing for almost three decades, and today noticeable improvements have been achieved."

It should be noted that scientific and innovative activity is one of the main criteria for determining the level of development and development of higher professional educational institutions. It is with this factor in mind that at the university, the focus of the institution's management is always on improving the level and quality of scientific work, the implementation of important achievements of scientists in clinical practice. This is due to the fact that from year to year the attention of teachers of education has increased to the study of various areas of medical science, and the number of researchers and specialists is constantly growing due to talented young people.

The organization and holding of the conference "Achievements and problems of fundamental science and clinical medicine" is evidence of the development of scientific and practical ties between domestic and foreign scientists. The purpose of the scientific summit is to create favorable conditions for constructive arguments in the field of science with scientists and doctors, to create free conditions for establishing friendly ties and mutually beneficial cooperation with the most advanced and therapeutic works and to introduce the achievements of modern medicine into medical practice.

Scientists and political figures of Tajikistan, the Russian Federation, Kazakhstan, Uzbekistan, Kyrgyzstan, Ukraine, Poland and Belarus are expected to participate in the conference online and offline.

Within the framework of the conference, the 80th anniversary of the departments "General operation No. 1 named after Qahhorov Abdurauf Nosirovich, "Dermatovenerology“, "Microbiology, Immunology and Virology“ and the 40th anniversary of the Faculty of Pharmacy, as well as holding 6 symposiums within the framework of the conference on the topic ”Topical issues of dermatovenerology and psychology: from innovation to practice“, "Infections in medicine". COVID-19. "Peacemaking and modern sciences", "excitement and health", "problems of diabetes mellitus and its instincts", "obesity and healthy nutrition" and the 6th lectures related to "Problems of dentistry", "fundamental sciences", "surgical disciplines No. 1: operations, gynecology, gynecology, oncology", "surgical disciplines No. 2: operations of children, trauma, traumatology, nervous surgery", "topical issues", "pediatrics".

The conference will present the achievements of prominent scientists of the Republic of Tajikistan and well-known scientists of foreign countries for a wide range of participants, considered and implemented issues of fundamental and applied research in medicine, modern and innovative technologies in theoretical and clinical medicine, the implementation of new scientific achievements in the process of higher medical education.

The topics of the reports under consideration are diverse and cover various areas of science, including: morphological and functional properties of the zoo embryo of esoteric diabetes mellitus on anemia, what is esoteric dysphunsia and why is it being studied? the importance of anthropometric analysis of the body in the comprehensive monitoring of the health status of economically disadvantaged residents, the organization and conduct of scientific research in the field of medical education and current topics of modern society (arterial trembosis), etc.

The conference was held at the 6th teachers, who are led by: SEI "TSMU named Avicenna” and other reputable scientific institutions.

It should be noted that from November 15 to November 19, 2021, it is planned to hold “Days of Science and Innovation in the SEI "Avicenna TSMU", which covers the following sectors:

The First Congress of Pharmacists of the Republic of Tajikistan;

International seminar "Assessment of cooperation of Central Asia in the field of medical education”;

Within the framework of the Days of Science and Innovation, it is planned to hold educational lectures and training seminars for teachers and students, doctors of healthcare institutions of the city of Dushanbe and districts of republican subordination, as well as trainings of well-known professorial medical universities of the cities of Nursultan, Shymkent of the Republic of Kazakhstan, Tashkent, Samarkand, Bukhara of the Republic of Uzbekistan.

In conclusion, the resolution of the conference is adopted, which will contribute to the introduction of modern achievements of world and domestic scientists to the practical practice of medicine, the development of healthcare and the improvement of society.