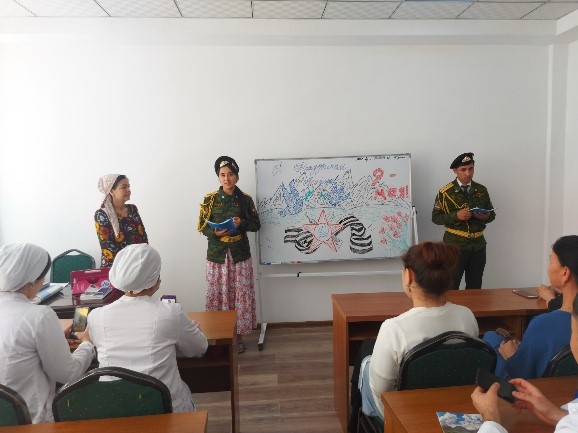 On May 7, 2022, a scientific and cultural activity dedicated to the Victory Day was held at the Department of Foreign Languages ​​with the participation of teachers of the department and students.

The activity was opened by hosts Bakieva Musharafa and Ziyodullozoda Javokhir with the following words: There are dates in the history of mankind, the significance and greatness of which become even more obvious over the years. Victory Day is one of such memorable dates. It is dear and respected by all mankind, including us Tajiks. With the outbreak of war, Tajik children were among the first to go to the front in two detachments. In general, more than 290 thousand people from our country took a direct part in the fierce battles of the war against fascism and showed unparalleled courage and bravery.

Poems in honor of the Motherland were performed by students Abdunazarov Sabur, Sodikov Abduvosit, Usmonova Rakhima in Tajik, Russian and English, as well as the song "Katyusha" performed by all students.

The activity ended with the words of the Motherland: “The feeling of patriotism and their indifference to the problem today is an example for us, who have strengthened the independence of our state and set the goal of the creation and prosperity of our beloved Tajikistan. May the future generation of Tajiks with such a great sense of patriotism and national pride direct their efforts only towards the prosperity of their Motherland.

Teacher of the department Najmiddinova D.M.