FROM DIRAFSHI KOVIEN TO THE NATIONAL FLAG OF TAJIKISTAN. Historical and lyrical photo tour "Khovar" On 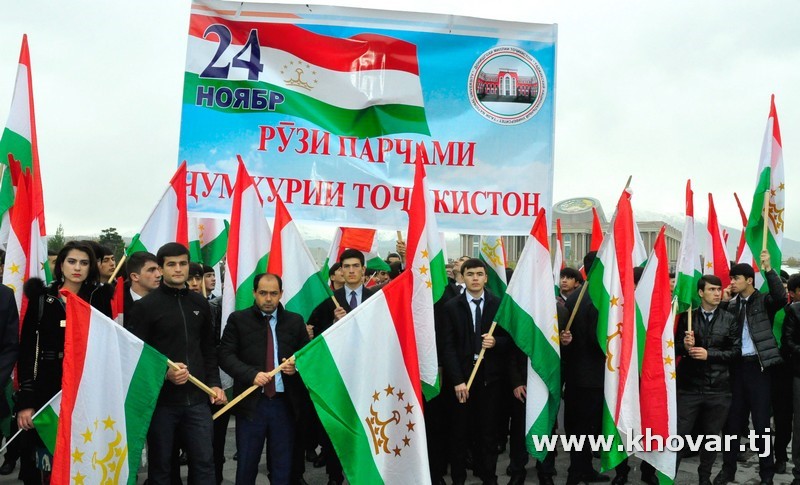 November 24, 2009, by Decree of the President of Tajikistan Emomali Rahmon, one of the official holidays of Tajikistan was adopted — the Flag Day of the Republic of Tajikistan and is celebrated annually on November 24 throughout the country. In honor of this day, the correspondent of NIAT "Khovar" decided to collect information from the river directorate to the state flag and provide them to readers.

The National flag of the Republic of Tajikistan is a rectangular canvas on which there are three horizontally arranged colored stripes: the upper stripe is red, the width of which is equal to the green stripe below; the middle one, the width of which is equal to one and a half width of one of the colored stripes. On the white stripe, instead of a wooden one in the center of the flag, a stylized crown is depicted in gold, above which seven stars are depicted in a semicircular shape. The ratio of the width and total length of the flag is 1:2.

The State Council of the Republic of Tajikistan was approved on November 24, 1992.

For the first time, the National Flag Day in the country is celebrated on November 24, 2009.


The flag has been a symbol of statehood, pride and honor and dignity since ancient times. It is from this that archaeological finds, weeklies, Writings and various demons that have survived to this day testify.

According to historical sources, flags have a history of more than 3-4 thousand years. The first flags appeared in China, Egypt and the Ancient Era, which are a symbol of independence and freedom, as well as peace and stability.

Flagmu dirafsh is an ancient Tajik dictionary, the name of the Turkish fortress, Livo and Alamy Arabic words. In the "Shahnameh" of the Fatherland of Abulmosim Firdavsi, it is noted that "Dirafshi Kovien" for many years was a symbol of pride of the ancient Aryan states - the Khakhomanids, Akfeyev and Soseyev.

At the same time, as in the case of women," this can lead to the fact that the whole country overnight or even if she suspects that she will not change without a good reason. He also noted that in the cities and districts of the region there is a great potential and ample opportunities for processing vegetables and fruits, as well as packaging dried fruits.

The Tajik people have been the flagship nation throughout history. In fact, before the foundation of the flag in its current form at the beginning of Libya, it was used as a symbol or a sign of invocation for unity and struggle, but it did not act in today's form, consisting of the described fabrics and symbols, but of various things.

Then, over time, the flag changed and received a uniform and established form.

Tajikistan became a Soviet Socialist Republic on October 16, 1929 and became part of the USSR. This flag was adopted on February 23, 1929.

With the Republic of Tajikistan and the acceptance of the new Basic Law, its flag was also changed and conquered on February 25, 1931.

On July 4, 1935, the flag was changed, the name of the republic was written in the flag in Russian.

In 1928, the Tajik alphabet was born from the Persian Gulf to Latin. This change also affected the flag. According to the press service of the Ministry of Industry and New Technologies of the Republic of Tajikistan, during the meeting the parties discussed the possibilities of cooperation within the framework of the CSTO.

The flag of the Tajik Soviet Socialist Republic was a red piece in the size of 1:2, which had two stripes of white and green. The white stripe was twice as wide as the green stripe. White was a symbol of floriculture, artistic construction of the country and green was another representative of agricultural products.

Prior to the adoption of the current flag of Tajikistan, the old Soviet flag was put into operation with minor changes, without a five-pointed star and with the sign of the communist inscription "Taoist balband".

It should be noted that Tajik poets made poems in honor of the national flag of the Republic of Tajikistan and some of them began to serve the people.

What is a flag? It is the pride of the nation.

What is a flag? It is the power of the nation.

What is a flag? Respect for the nation.

O flag of hope, so that thou mayest fly,

You are our rainbow of happiness in the sky.

Your redness is sure to be red,

Eternal glory was due to this reputation.

Your white color is our white happiness,

Our white path, the symbol of our hope.

We will go with you to the summit,

May your seven stars guide us!

From your green color the green of the Motherland.

Let's grow green by the grace of the shadow,

Who made you happy in heaven ?!

Let his name remain in this world,

The colors of our flag are bright,

The crown of that ancient heritage is upon us.

The way to a happy world.

The green color of our souls,

The red color is the blood of our ancestors.

In its whiteness is the path of white happiness,

Leads us to a hopeful future.

Our flag has become the head of the nation,

The power of the free has reached its peak.

This is a symbol of the conquest of the symbol of Koviyon and Rustam,

A guide to the city of bliss.

The pure sun of the union sky,

Light shines forever in the world of unity.

The conquest hand of the heroes is an unshakable slogan,

From you our reputation, now a perfect line.

From you came our people to the arena of peace,

Moyavar is proud of his initiative and balance.

The new Tajik peace document is a flag,

The stability of my Aryan body is a flag.

Photo from the archives of NIAT "Khovar" and other sources

FROM DIRAFSHI KOVIEN TO THE NATIONAL FLAG OF TAJIKISTAN. Historical and lyrical photo tour "Khovar" On