Every citizen of Tajikistan has a duty to protect national unity 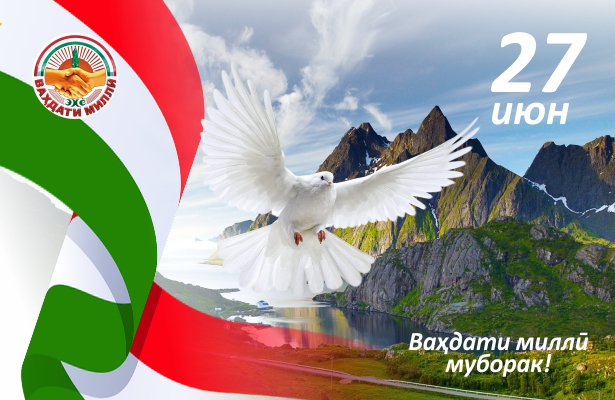 Thanks to the consistent efforts of the Founder of Peace and National Unity - the President of the Republic of Tajikistan, respected Emomali Rahmon, our homeland, which was in the maelstrom of civil war and the threat of disappearing from the political map of the world, and the collapse of the Tajik nation, has been saved from national tragedy and strengthened its state independence. The head of state, the respected Emomali Rahmon, is among the hardworking and responsive sons of the nation. Fortunately for the people of Tajikistan, in such a difficult situation, he assumed great responsibility for the fate of the people. Through the efforts of the President of the republic, unbreakable peace has been achieved and the country's opposition forces have finally united, opening arms of brotherhood to one another.

It has been already 25 years that we are living in a peace and unity. Obviously, the political crises, regional conflicts, economic and trade sanctions, and also spread infectious diseases are very disturbing the world communities. In today's world, where the political situation and the system of international relations are changing rapidly, every citizen of the country is obliged to protect, cherish and appreciate, and direct all his or her strength to protect the ancestral land, to strengthen the foundations of national statehood, to achieve the independence of our country, to create and develop our beloved Motherland.

As we can see today, the situation in the world community is changing rapidly, and the process of globalization and the problems of human life are becoming more complex. Indeed, as the President of the country stated in his Address: "We are alarmed by the recent manifestations of hegemonism, rapid rearmament, and signs of the beginning of a new phase of the Cold War in the world. This year has seen continued conflict and unrest in various parts of the world, making it a difficult and controversial period for the global community."

Terrorism and extremism, religious radicalism and superstition are major threats to the present and future in the region, including Tajikistan. In fact, terrorist acts in many parts of the world have claimed the lives of thousands of innocent people, destroyed cities, villages and unique historical monuments, causing hundreds of billions of dollars in damage to national economies. The continuation of this phenomenon is a threat in every respect, not only increasing political, economic humanitarian and cultural threats, but also causing outbreaks of various infectious diseases in all regions of the world and calling into question the health of societies. In the global context, despite the world's great economic and financial difficulties, Tajikistan exists as a free, democratic, secular, legal state with an open-door policy.

The unstable situation on the Tajik-Afghan and Kyrgyz borders cannot leave our people indifferent. We must be restrained and vigilant, not give in to any intrigues and follow the instructions of the President, who is responsible for ensuring state and national security.

It is the duty of every citizen of Tajikistan to strive for the prosperity of the homeland and the multiplication of its authority, as well as to conscientiously perform their sacred duty of maintaining peace and stability in the country, ensuring security, strengthening national unity, protection and preservation of independence, protection of the country's borders and strengthening the state and society. Today, national unity has become one of the most important values of our society, and the issue of unity and solidarity has a high value. The glorious people of Tajikistan will always respect and defend this national value.

Taibov S.A. – head of the information and public relations department

Every citizen of Tajikistan has a duty to protect national unity