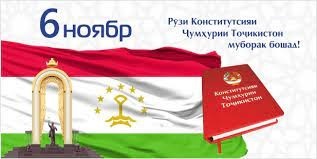 The founder of peace and national unity, the Leader of the Nation, the President of the Republic of Tajikistan, dear Emomali Rahmon, in one of his speeches noted: "The Constitution as the supreme law will lay the legal basis for the development of society through the adoption of new laws and regulate various social relations."

It was thanks to the acquisition of state independence that Tajikistan was recognized as an integral part of the world community.

After the acquisition of an invaluable good, that is, sovereignty, a new document had to be developed and adopted, since at all times the development of the state and statehood was aimed at determining the structure, governance of statehood and stability of statehood, which includes all the goals of the state, which are designated by the Constitution and the basic essence. For the first time, the Constitution of independent Tajikistan was adopted on November 6, 1994 in the development of a national referendum, which is a fateful fateful basis for the Tajik people.

So, November 6, 1994 is one of the fateful dates of the nation for the entire Tajik people, because it was on this day that a decision was made by a national referendum in the Republic of Tajikistan, which this year we will celebrate the 27th anniversary. This date is a historical date for our people and embodies the present and future destiny of our state. History shows that in Tajikistan from 1929 to today 5 times, that is, in 1929,1931,1937,197,1978 and 1994, various Constitutions of the Republic of Tajikistan were adopted and completely differs from the new Constitution of the Republic of Tajikistan, its norms have direct effect and comply with the standards of international normative legal acts.

The Constitution of the Republic of Tajikistan consists of 10 chapters and 100 books.