Ceremony event to the Day of "National Unity" at the ATSMU 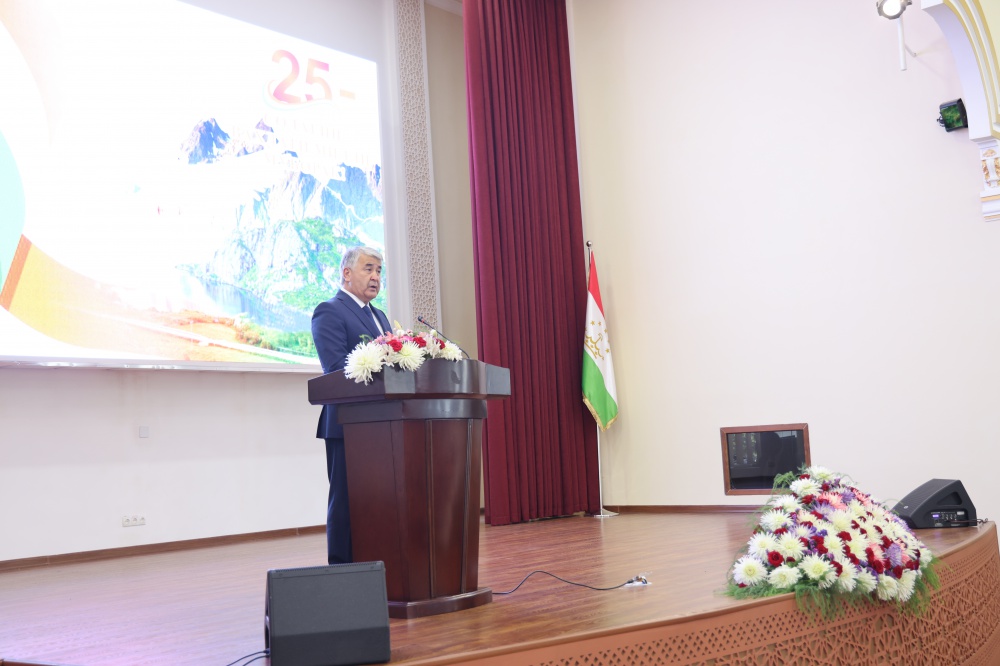 June 25th , 2022, was held at the ATSMU, a solemn event dedicated to the 25th anniversary of the "National Unity Day" with the participation of the rector of ATSMU, d.m.s., professor Gulzoda Mahmadshoh Qurbonali, the faculty staff members and the university students.   Respected rector, Professor Gulzoda M.Q. In his opening speech has noted that in the history of independence of Tajikistan, June 27th , 1997 is marked with golden letters, as a fateful day to achieve national unity of the country, and every year throughout the country is celebrated with special ceremonies and numerous state events. It was on this historic day that armed clashes and political misunderstandings among Tajiks came to an end and paved the way for universal peace throughout the country. The Tajik peace talks, which lasted more than three years, were greatly facilitated by three main factors - the efforts and enthusiasm of the government, the participation of the opposition and the mediation of international organizations and friendly countries. Today, our united nation puts the stability and peace of the Motherland above all interests and will not be replaced by any world values, because for our people Unity is the most sacred and unique fruit of independence, social stability, unity and security of the native land. On this basis, by uniting political forces and ensuring social harmony, we were able to defend the state independence and territorial integrity of our country, to ensure national unity on the basis of forgiveness, peace and reconciliation.

Unity is one of the main pillars of statehood, without which the existence of any state and nation is impossible. Consequently, unity is the main pillar of the existence and stability of any state and nation. It is the national unity that ensures peace, stability, tranquility, progress, development and dignified life of the people of each state. As the Leader of the Nation and the Head of our state stresses: "The issue of national unity has become one of the highest values of our society, is of great importance and is dear to the glorious people of Tajikistan”. Peace, prosperity and progress of our state stem from stability and national unity. Unity is the symbol and essence of the philosophy of peace, tolerance, unity and cohesion of all Tajik people. The Tajik people with their culture of tolerance and humanism have repeatedly saved the Tajik state and society from the deadly whirlpool of political games. At the same time, the sustainability of national unity largely depends on the strength of will, pure thoughts, wisdom and constant efforts of our mothers to educate children in the spirit of patriotism, diligence, national, spiritual and moral values, to study and respect the rich history and culture of our ancestors, and to guide young people in the ability to appreciate and cherish their homeland.

So, on the initiative and under the wise leadership of the Leader of the Nation, the President of the Republic of Tajikistan, the esteemed Emomali Rahmon, for 25 years the flag of peace and solidarity has been flying in our beloved country. During this period, the Republic of Tajikistan has achieved great success and is recognized as an independent and active country in addressing global issues on the world stage. Over the years, the significance and status of this momentous event - national unity - has become more valuable. Undoubtedly, the merits of the Founder of Peace and National Unity - the Leader of the Nation, President Emomali Rahmon in this direction are great, for as a wise and peace-loving architect he has built our National Unity and united the fragmented Tajik people. It was the tireless and boundless efforts of the president of the republic that glorified the national unity of Tajikistan. In the name of achieving national unity and strengthening state independence, the head of state repeatedly put his life at risk so that the ancient and civilized Tajik people and beloved Tajikistan would be freed from the abyss of destruction, so that peace, stability and tranquility would reign in the country.

Today, when the Republic of Tajikistan is an independent, democratic, legal and secular state, the glorious people of Tajikistan - every Tajik , must, first of all, strive for prosperity and progress of the land of ancestors, not to alienate and betray the nation and homeland, constantly feel the primacy of national and state interests, be a patriot! We can say with confidence that the courageous and peace-loving youth of Tajikistan will fight the spread of terrorism and extremism on the borders of their beloved homeland by all means, both practical and spiritual.

These and other achievements achieved during the years of state independence of the Republic of Tajikistan and National Unity were highlighted in a speech by A.S. Saidov, head of the department of sociology of the University.

The people of our country are grateful that 25 years ago, thanks to the selfless work and heroic deeds of the Founder of Peace and National Unity - the President of the Republic of Tajikistan, the respected Emomali Rahmon, our native Tajikistan, which was in the whirlpool of civil war and the threat of disappearing from the political map of the world, was saved from national tragedy and the split of the Tajik nation, and strengthened its state independence. Fortunately for the people of Tajikistan, an unbreakable peace has been achieved and the country's opposition forces have finally united to embrace one another in brotherhood.

Ceremony event to the Day of "National Unity" at the ATSMU