CELEBRATION OF KNOWLEDGE DAY AT ATSMU 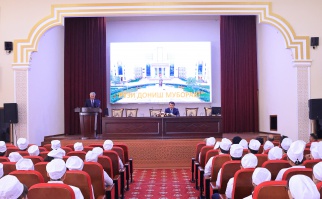 September 1st, 2022, with the participation of the Minister of Health and Social Protection of the Population of the Republic of Tajikistan, Honorable Abdullozoda Jamoliddin Abdullo, Rector of the Avicenna Tajik State Medical University, Honorable Gulzoda Mahmadshoh Qurbonali, guests, faculty and students held a celebratory event dedicated to the Knowledge Day.

The ceremony was opened by the Rector of the Avicenna Tajik State Medical University, Honorable Gulzoda Mahmadshoh Qurbonali, and during his speech he noted that: "The celebration of the Peace Lesson and the beginning of the new academic year in the country with the participation of the Founder of Peace and National Unity - the Leader of the Nation, the President of the Republic of Tajikistan, his excellency Emomali Rahmon is a clear witness of the great respect of the Government of the Republic of Tajikistan for peace and calmness, political stability of society, high status and position of science and education, spirituality and enlightenment, teachers' work and efforts of pupils and students, that is the future generation of the nation.

The founder of national peace and unity - the Leader of the nation, the President of the Republic of Tajikistan, his excellency Emomali Rahmon annually at the beginning of the new academic year - the Day of Knowledge, talks about the essence of peace and stability and high value of unity and cohesion, which is mainly studied in secondary schools and higher educational institutions of the country, they remind. At the time of independence the health sector was declared a vital and priority branch of society in the system of social policy of the state and the Government of the Republic of Tajikistan, and beneficent measures are constantly being implemented for the development of the sector. That is why during the years of independence many educational and medical institutions were built in the republic, educational and recreational facilities are equipped with the most unique medical technology, which contributes to the health of society and the creation of favorable conditions for education. and education.

The rector of the university, honorable Gulzoda Mahmadshoh Qurbonali, continued his speech by saying: "It is very symbolic that this year's Knowledge Day and Peace Lesson was remembered by the health sector, especially Avicenna Tajik State Medical University and on this day, the new main building, which was built and commissioned on the creative and innovative initiative of the leader of the nation, his excellency Emomali Rahmon”.

In fact, in today's world, science and knowledge are becoming increasingly important as one of the sources of society's progress, and life and the progress of the modern world require everyone to have knowledge and skills, and this can only be done by incorporating knowledge and continuous learning.

Head of administrative department of the Rector’s Service

CELEBRATION OF KNOWLEDGE DAY AT ATSMU