"Borders-2021"! We Tajiks are always ready to fight against the enemies of the nation and the state. 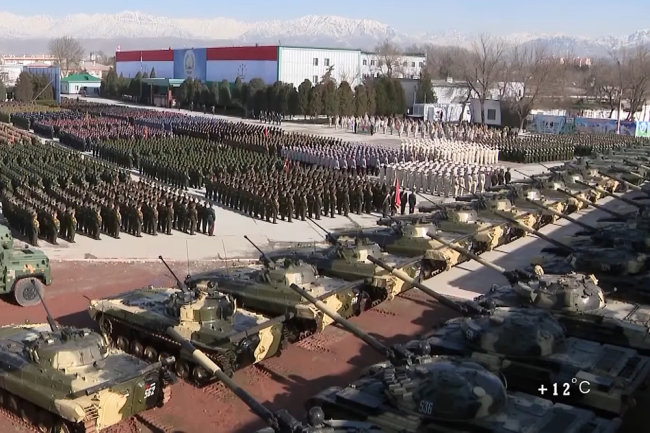 On average, for the first time in 30 years, on 22. 07. 2021, by the Decree of the President of the Republic of Tajikistan, the Leader of the Nation, the Supreme Commander of the Armed Forces of Tajikistan, Army General Emomali Rahmon, the combat readiness of units of the Armed Forces, law enforcement agencies, and personnel of mobilization resources was checked. At this event, 100 thousand officers and soldiers of the Armed Forces, law enforcement officers and 130 thousand officers and soldiers of the mobilization personnel throughout the country were gathered with alarm, and their combat training was checked. During the tests of combat readiness of the Armed Forces, law enforcement agencies, personnel of mobilization resources, conducted under the name "Marz-2021", 1023 armored vehicles, 3167 motor vehicles and special vehicles, 447 artillery and mortar means, 234 means of armed defense, 45 military vehicles in operational areas were laid out.

In the very sensitive conditions of the region and the modern world, the protection of the security of the nation and the state, a calm political and social atmosphere, peace, tranquility, political stability, national unity and unity of the nation for our statehood are of paramount and crucial importance. The situation of our neighboring country, the Islamic Republic of Afghanistan, especially its northern regions that border our country, remains uncertain, and their beginning is becoming more complicated every day. With regard to the unstable situation in the region, the Head of State stressed that we must be ready to protect the peace and tranquility that we have acquired dearly, political stability, national unity, the security of the state and the people. It should be said that the army or its Armed Forces at any time are the basis for every independent country, the guarantor of security and the provider of peaceful life for its people. The Armed Forces of the Republic of Tajikistan are considered the heritage of state independence and one of its important achievements, from the first days of its creation, they were assigned a sacred and glorious task-to protect sovereignty, ensure peace and stability, protect the security of the state and society. We can proudly say that today the employees of the embassies of the civilized Forces of the Republic of Tajikistan have a high defense capability, in the light of the constant support and care of the Government of the Republic of Tajikistan, they have a high defense capability of the borders, borders, security and stability of the state and the nation.

We, the Tajik people, have a powerful army to protect the borders of Tajikistan and independence. Today, the personnel of the Armed Forces of the Republic of Tajikistan are able to protect the lives of their representatives of Independence, peace, tranquility and national unity from loyal insurgents, terrorist and extremist groups and other armed criminal groups. Each independent State relies on the protection of its stability and security of the security structures, including the National Army. The Armed Forces of the Republic of Tajikistan are the main support of the state, the guarantor of peace and stability of society, the peaceful world of life of citizens and a reliable shield of the nation.

"Borders-2021"! We Tajiks are always ready to fight against the enemies of the nation and the state.