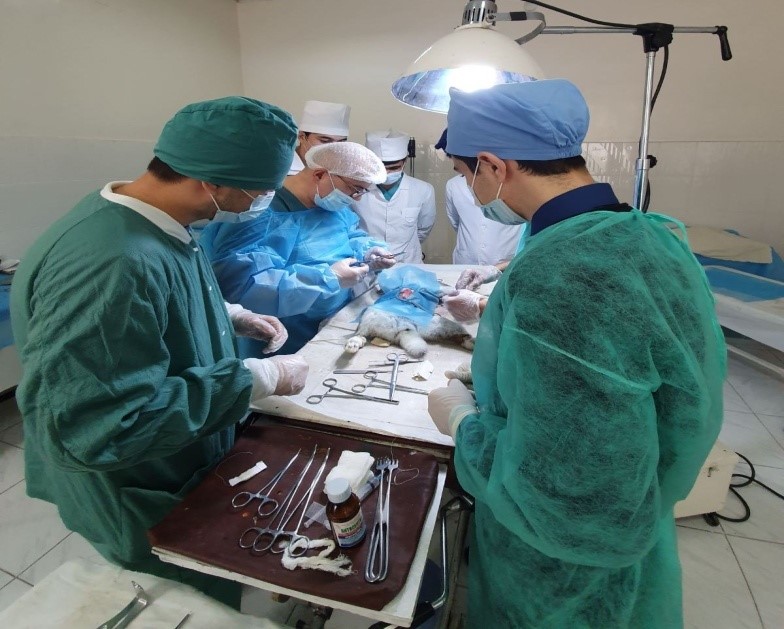 The experimental surgery department consists of 2 operation rooms and has such equipment: 3 operating tables (two tables for educational surgeries, scientific surgeries, orientation of surgery (8 times), a surgical lamp, a set of surgical instruments, . a surgical device, a board for surgery for of small experimental animals (frog, rat, piglet, rabbit), cabinet for storage of medicines, two big work tables, two tables for storage of surgical instruments.

In the experimental surgery sector are performed educational and scientific surgery. During the reporting period, there have been made 198 surgical operations, from which 62 scientific and 136 educational operations and the club of the “Young surgeons”.

In the laboratory are having activity the young surgeons, whose members are 3th and 5th year students. During the reporting period, members of the club performed 75 operations on resection of the small and large intestine, gastroenteroanastamosis, gastric resection by the method of Billroth I, Billroth II, resection of the liver. The club of young surgeons performed 76 surgeries - gastric bypass, thoracotomy by lung, gastrostomy, nephrostomy, gastric bypass Billroth I-II, gastroduodenanastamosis, liver resection, nephrectomy, cholecystectomy.

From 05.06.2021 to 18.06.2021 in the operating room of CSRL by interns and residents of the department of surgery of the university (general surgery №1 and №2, surgical diseases №1 and №2, topographic anatomy and surgical practice) and with the mutual assistant of the department for mastering surgical techniques have been made 26 surgical operations - gastric resection by Billroth I, II, placement of gastroduodenoanastamosis, cholecystectomy, appendectomy, cholelithiasis, resection of the small intestine, putting jugular vein.

In partnership with the "Medical-Social Institute of the Republic of Tajikistan" in the experimental surgery sector of CSRL was held 12 surgery operations on “Construction of a model of urinary stenosis and elimination of a defect of the urinary tract “, head - Ibadzoda KH. N., the mutual assistant Raufov A.R., in the test animal (rabbits). As a result of the study of the destructive properties of the complex study material of the experimental pharmacology department of CSRL 36 experiments on irrigation of cholera in experimental animals (guinea pigs and white mice) were conducted.