An international scientific and practical conference was held under the title "Achievements and problems of fundamental science and clinical medicine". 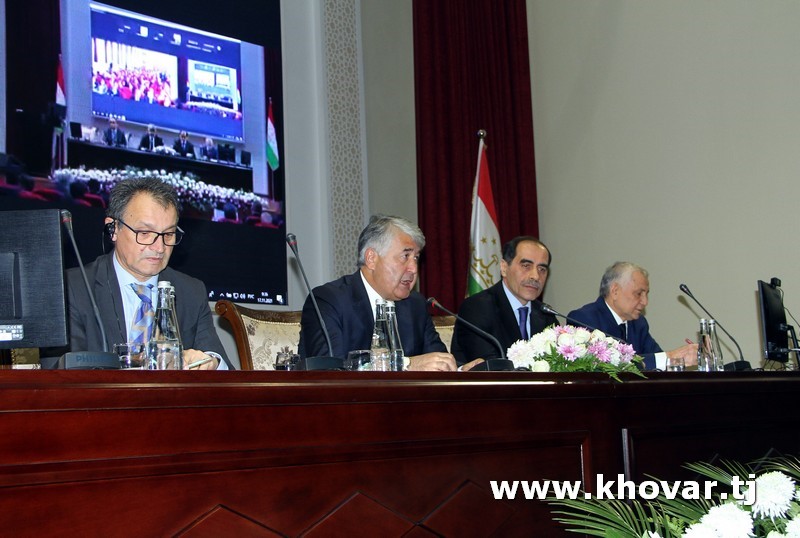 The 69th anniversary of the state independence of the Republic of Tajikistan and the years of rural development, tourism and folk crafts on the theme "Achievements and problems of fundamental science and clinical medicine" of the 69th International Scientific and Practical Conference took place today at the Avicenna Tajik State Medical University.

The correspondent of NIAT "Khovar" informs that this conference was attended by the Minister of Education and Science of the Republic of Tajikistan Mukhammadyusuf Imomzoda, First Deputy Minister of Health and Social Protection of the Population of the Republic of Tajikistan Gafur Muzinzoda, Vice-President of the National Academy of Sciences of Tajikistan Alijon Zashzoda, Rector of the Tajik State Medical University, Professor Mahmadshoh Gulzoda, head of the representative office of the World Health Organization in Tajikistan Viktor Olsavsky, teachers and students of donshtirok.

The conference was attended by scientists and politicians from Tajikistan, the Russian Federation, Kazakhstan, Uzbekistan, Kyrgyzstan, Ukraine and Belarus via the Internet.

As the Founder of Peace and National Unity-the Leader of the Nation, the President of the Republic of Tajikistan, dear Emomali Rahmon, at a meeting with healthcare workers on August 18, 2020, said: "The healthcare sector is one of the priorities of the social policy of the State of Tajikistan, has been successfully developing for almost three decades and today noticeable improvements have been achieved."

Scientific and innovative activity is one of the main criteria for determining the level of development and development of higher professional educational institutions. It is with this factor in mind that at the university, the focus of the institution's management is always on improving the level and quality of scientific work, the implementation of important achievements of scientists in clinical practice. Until today, the Center pays great attention to teachers of educational institutions to the fact that from year to year more and more attention is paid to the study of various areas of medical science, the number of researchers and specialists from among capable young people is growing more and more," Mahmadshoh Gulzoda said.

He also noted that one of the important events that we have undertaken this year is the creation of the Council of Science, Education and Innovation under the President of the Republic of Tajikistan, whose purpose is to address the problems of the branches of science, education and innovation.

He also noted that in the cities and districts of the region there is a great potential and ample opportunities for processing vegetables and fruits, as well as packaging dried fruits. On this basis, the university management decided for the first time, with the involvement of foreign scientists and experts, to hold Days of Science and Innovation at the university from November 15 to 19.

The organization of the conference "Achievements and problems of fundamental science and clinical medicine" is evidence of the development of scientific and practical ties between domestic and foreign scientists. The purpose of the scientific conference is to create favorable conditions for creative scientific discussions with scientists and doctors, to create favorable conditions for the restoration of friendly relations and mutually beneficial cooperation with the best educational and medical achievements abroad and the introduction of modern medicine achievements in medical practice," the rector of the State Medical University added.

First Deputy Minister of Health and Social Protection of the Population Gafur Mukhsin noted that with the support of the Government of the Republic of Tajikistan, the leader of the nation, dear Emomali Rahmon, accelerates the development of medical science and creates new opportunities for industry specialists with its new achievements. Tajik State Medical University has a rich history and acts as the main center for training specialists with higher education in the field of healthcare.

During its 80-year activity, the First Deputy Minister of Health, the University has trained more than 45 thousand leading industry specialists who work in Tajikistan and more than 40 foreign countries. The Medical University has gained special popularity not only in the country, but also abroad as a prestigious scientific institution and a reliable training center for specialists with higher medical education. The result is that the number of applicants from foreign countries is growing from year to year. Currently, more than 1,500 students from 16 countries of the world study at this University of science.

Recall that within the framework of the conference, it is planned to celebrate the effective scientific activities of the departments "General operation No. 1 named after Qahhorov Abdurakhmon Nosirovich ", "Dermatovenerology", "Microbiology, Immunology and Virology" and the Faculty of Pharmacy.

An international scientific and practical conference was held under the title "Achievements and problems of fundamental science and clinical medicine".