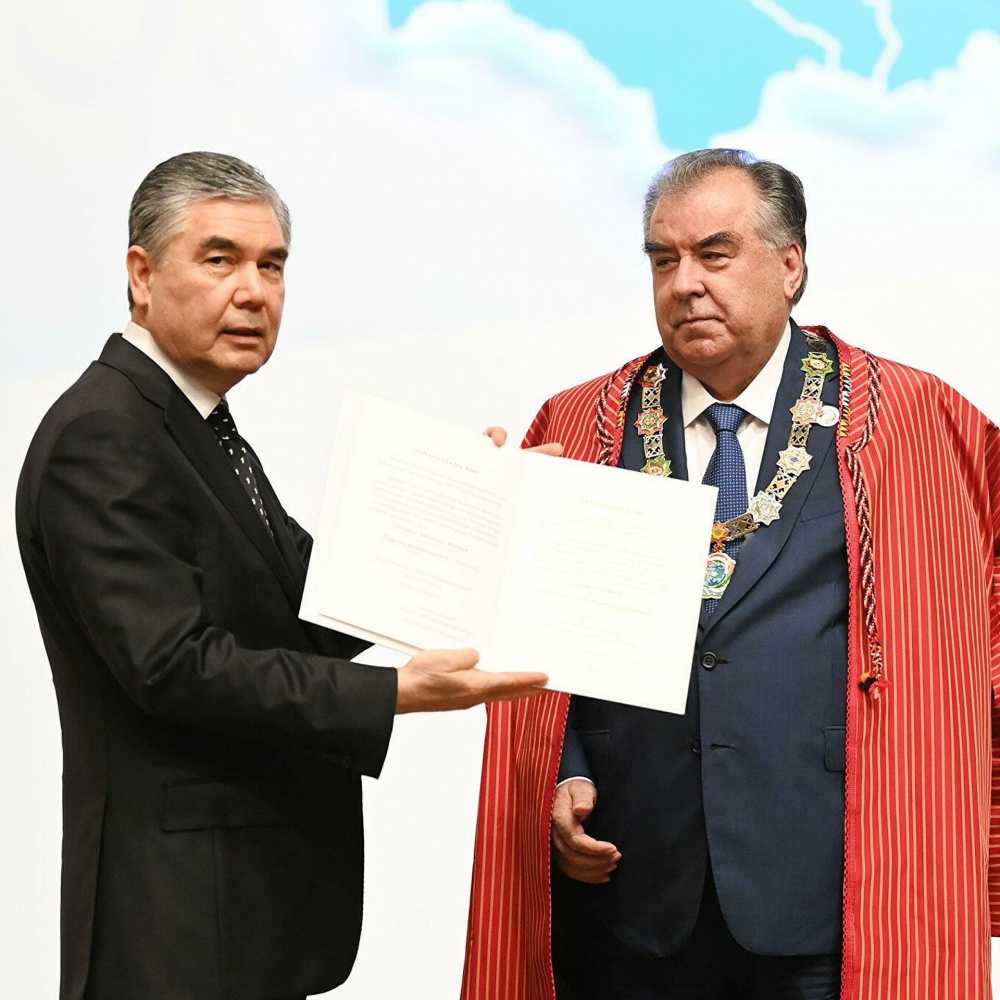 As we all know, on August 6, 2021, in these blessed days, which bring us closer to the celebration of the 30th anniversary of the great national holiday - State Independence, the Founder of Peace and National Unity - Leader of the Central Asian states in Turkmenistan. Nation, President of the Republic of Tajikistan Emomali Rahmon during the Summit of Central Asian Heads of State presented the first high award - "Badge of Honor of the Heads of Central Asian States" for meritorious services in the development of friendly relations, good neighborliness, mutual understanding and cooperation, strengthening peace and security in Central Asia. the region, the promotion of joint interests and initiatives of the countries of the region in the international arena. This good phenomenon and good news for the civilized Tajik people is a matter of pride and will undoubtedly be engraved in the pages of history in golden letters. This was stated by the rector of the Academy of Public Administration under the President of the Republic of Tajikistan, Doctor of Law, Professor Abdukhalil Ghafurzoda during an article addressed to the NIAT "Khovar".

Honoring this high award once again demonstrates the prestige of this wise man, wise politician, united leader in the international arena, recognition of the new style of statehood of the President of the Republic of Tajikistan Emomali Rahmon as the savior of the nation and state and the revival of new and independent Tajikistan. and gave every Tajik citizen a bright hope for a prosperous and prosperous future of the country.

This worthy recognition has once again proved that the Tajik nation is one of the most ancient nations and has a long history of statehood, which has taught the experience of statehood and public administration to the races and other nations of the region and preserved its essence for centuries.

It was the leadership skills, courage, bravery, determination in political decision-making and political wisdom and social justice that led the Tajik leader to gain fame and prestige not only domestically but also internationally.

In this context, it should be noted that thanks to the independence and the wise policy of the Leader of the Nation Emomali Rahmon, the Republic of Tajikistan today is steadily strengthening its position and position in the international arena among other countries.

It should be noted that Tajikistan under the leadership of the Leader of the Nation from the very beginning pursued its domestic and foreign policy to protect independence and territorial integrity, security and national unity, build a democratic society, develop a market economy, create a stable international legal framework, mutually beneficial multilateral cooperation various international organizations.

It is obvious that in the sensitive conditions of geopolitical changes, the collapse of the system of various states, only the most talented leaders can take responsibility for the state and its people and bring the ship of state to shore in the face of a terrible storm. History testifies that in the crucial moments of every nation, personalities emerge who take responsibility for the future of the nation, save the country and the people from the abyss of destruction and destruction.

At the beginning of the 90s of the last century, when the independent state of Tajikistan was on the verge of disintegration, the nation needed a real leader, a kind, courageous, prudent and enterprising leader who would not be afraid of difficulties, unite the nation and reconcile with friends and enemies. That is, to be kind to friends and to take the path of madness with enemies and to make Tajikistan a safe, stable, prosperous and exemplary state state, which was the wise and courageous leader Emomali Rahmon, who entered the political arena with special courage and wisdom.

Naturally, the reputation and popularity of the people do not come easily to anyone. For this, in addition to the ancient qualities of man and leader, it is necessary to work around the clock, care for the nation and selflessness in order to strengthen state independence, international prestige and progress of the country. Fortunately, the Founder of Peace and National Unity - Leader of the Nation, President of the Republic of Tajikistan Emomali Rahmon has received this happiness in the full sense of the word.

The process of state-building is a long and complicated process, and at each stage of its development there are many difficulties. Today, when the world is plunged into a whirlpool of bloodshed and terror from the brutal games of geopolitical powers, when the true independence of states is in question, when man is unable to fulfill his mission of civilization, only that leader can ensure the security of his country. which has the innate power of management. It is this natural power that today has allowed the Leader of our nation to choose a safe position in the turbulent ocean of globalization and to run the state in peace.

At the same time, the process of development of international relations shows that the positions of countries in terms of economic, military and political development are determined, and each unites to protect its interests in certain economic, political, military and cultural spheres. In this process, the issues of the Leader of our Nation on global issues of today's world, such as clean water, the fight against terrorism and the protection of the holy religion of Islam, have made this great historical figure a recognized figure in international politics.

In particular, international organizations and world-class experts assessed the initiatives of the Leader of the Nation in connection with the proclamation of 2018 as the Year of Tourism and Folk Crafts, 2019-2021 - Years of Rural Development, Tourism and Folk Crafts and the provision of benefits for the industry. This testifies to the fact that the initiatives of the Supreme Leader of the Nation are timely, well-received by the world community and are being followed and implemented at the international level.

Today the world knows Tajikistan and Tajikistan in the person of the President of the country. He is a real representative of the state, culture and civilization of the nation and the best example of politics.

The institution of leadership of the Leader of our Nation is a great school of statehood, which every self-aware and patriotic person should learn. Tolerance, high political culture, humanism, justice are the values ​​that ensure the stability of this institution. He was able to gain the trust and recognition of the people. Indeed, our national statehood is a unique phenomenon in the history of human society, which adorns our past.

The activity of the Leader of the Tajik Nation during 30 years of independence is 30 years of political and historical maturity and self-realization of a person who dedicated his life to preserving the unity of the state and national identity of his people in the face of globalization. The awarding of our beloved President to this high award at the international level is not accidental, but very worthy.

We, the Board and the faculty of the Academy of Public Administration under the President of the Republic of Tajikistan are proud of the United Leader of the Nation, a wise and prudent leader and a world-class politician, and we are proud of this significant achievement.

Under the motto "Forward with the Leader of the Nation!" - We will be encouraged to work more effectively to strengthen the foundations of state independence, a comprehensive study of the School of Statehood of Emomali Rahmon and, in general, to achieve the highest goals of the Government.